Hong puts on an All-Star display, beard and all

Hong puts on an All-Star display, beard and all 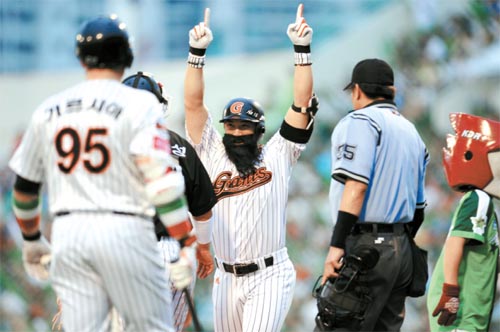 Hong Sung-heun of the Lotte Giants raises his arms in celebration after hitting a two-run home run for the Eastern League squad at the 2010 All-Star game in Daegu on Saturday. [NEWSIS]


The top players in the Eastern League - including a hefty number of Lotte Giants players - narrowly edged their Western League counterparts on Saturday in the 2010 KBO All-Star game in Daegu.

Designated hitter Hong Sung-heun and infielder Hwang Jae-gyun, both of the Giants, played key roles in the Eastern League’s 9-8 victory.

Boasting a powerful bat and a playful personality, Hong set a KBO all-time record by garnering the most votes from fans for an All-Star game, racking up a total of 818,269.

Entering the game with a thick faux beard - keeping up his penchant for All-Star game antics - Hong hit two home runs and was four-for-five at the plate with three RBI on the day, earning him Most Valuable Player honors. It marked the second time Hong has received the MVP distinction at an All-Star game, following a similarly stellar performance in 2006, when he played for the Doosan Bears.

“I feel great since our team won and I received the MVP honor as well,” Hong said in a postgame interview. “I will continue to stay humble and work hard to help my team reach the postseason.”

Hong, who wore a long wig under his helmet at the 2009 All-Star game, said he took some time to ponder his options leading up to this year’s match.

“My daughter likes Santa Claus and I also heard that some of the fans were not too pleased with the wig I wore last year, so I prepared a fake beard,” Hong said. “Having earned the most votes from baseball fans for the All-Star game, I wanted to provide something for the fans.”

The 2010 All-Star game was held in Daegu - home of the Samsung Lions - for the first time in 13 years. The game proved to be a popular event with fans, as the 10,000 tickets sold out more than three hours before the start of the game despite high humidity.

The Western League squad jumped out of the gates early, rocking its rival for six runs in the first inning alone. But the Eastern League team - consisting of players from the SK Wyverns, Samsung Lions, Doosan Bears and Lotte Giants - responded in the bottom half of the inning when Hong and his teammate Karim Garcia each managed to hit a home run, narrowing the score to 6-3. The Western League eventually padded its lead by two runs on a Jeong Seong-hoon single. But the bats of the Eastern League came to life in the seventh inning, with hometown hero Yang Joon-hyuk, Hong and Garcia producing three consecutive home runs to even the game.

The entertaining match came to a thrilling end with Hwang of the Lotte Giants, who was recently acquired from the Nexen Heroes, producing a game-winning single with the bases loaded in the bottom of the ninth inning to secure a victory.

Kim Hyun-soo of the Doosan Bears edged Choi Hee-seop of the Kia Tigers and Cho In-sung of the LG Twins in the Home Run Derby earlier in the day.

Some teams continued with business as usual despite the game. Nexen placed its All-Star right fielder Doug Clark on waivers on Saturday and signed veteran pitcher C.J. Nitkowski, who pitched for the SK Wyverns and Doosan Bears last season. Clark joined the Hanwha Eagles in 2008 and has been with the Heroes since last season.