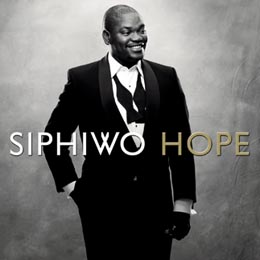 Siphiwo “Pavarotti” Ntshebe’s posthumous debut album serves to move the listener for both its musical merits and for the circumstances under which it was released.

The album’s title track, “Hope,” embodies the hallmarks of quality opera, leaving the listener with pangs of emotion for what could have been - to listen to Siphiwo perform live, as he was supposed to at the opening ceremony of the 2010 World Cup in South Africa. Siphiwo, 34, died two weeks before the start of the tournament from acute bacterial meningitis.

A magnificent experience for both veteran and amateur opera enthusiasts alike, “Hope” satisfies in ways other opera albums do not.

Siphiwo’s rendition of “Nessum Dorma” - the aria made famous by Pavarotti - inspires amateur listeners to continue their education in opera, but more importantly, reminds us of all of the potential that exists for African singers to redefine opera with a new voice: one filled with struggle, beauty, deep-seated African tradition, and above all, hope.