A STRATEGY BEGINS TO FORM
Fighting an uphill battle 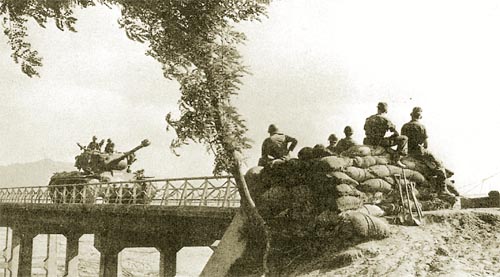 
Knowing the crowd in Daegu had been subdued, I began to relax. This also allowed me to focus on the enemy troops.

We saw more American reinforcement troops come to our aid. The commanding officer approached me in fluent Chinese and asked if I spoke the language.

The man was Col. Paul L. Freeman Jr.. His calm exterior made for a favorable first impression. He was in charge of the 23rd Regiment of the U.S. Army 2nd Infantry Division.

“I do know how to speak Chinese,” I replied in my passable Chinese.

“Let’s speak in Chinese, then,” he said.

“If it’s okay with you, why don’t we just speak English instead?” I said.

“Well, why didn’t you tell me you spoke English?” he said with a smile.

Colonel Freeman had been in Beijing for four years starting in 1931 studying Chinese and concurrently serving as the assistant military attache at the American Embassy. His pronunciation and use of expressions were excellent. I got the feeling Colonel Freeman had been concerned about communication since there was a lack of English-speaking officers in the ROK Army.

As allies participating in joint operations, it is imperative for the parties involved to communicate in an effective manner. With that in mind, Colonel Freeman had thought that a more effective means of communicating with the Korean officers was by using Chinese.

Colonel Freeman was well-known for defeating six regiments of the Chinese People’s Army’s 6th Division at the Battle of Jipyeong-ri (a village in Jije-myeon, Yangpyeong County, Gyeonggi Province) in February 1951. He was supported by the French, led by Lieutenant Colonel Raoul Magrin-Vernerey, also known as Ralph Monclar. Lieutenant Colonel Magrin-Vernerey was the commanding officer of the Bataillon de Coree, which was attached to the 23rd Regiment of the U.S. 2nd Infantry Division. Together, the allied forces had put up a valiant effort in winning the decisive battle over the Chinese.

Colonel Freeman would later rise to the rank of four-star general and become the commander of the U.S. Army Europe Continental Army Command. 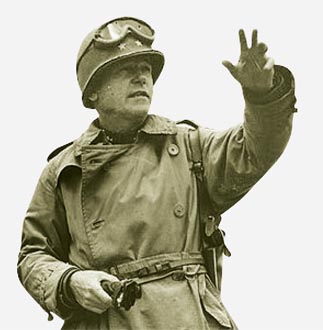 Colonel Freeman and his 23rd Regiment joined me and the ROK 1st Division, along with Col. John H. Michaelis and his 27th Regiment of the U.S. 8th Army 25th Infantry Division. It was the first formal joint operation between the ROK and the U.S. Army. When they arrived, we felt fortunate to have gained two respected and well-equipped U.S. Army regiments.

Colonel Freeman’s 23rd Regiment was in charge of protecting Ganseon Road just south of the area covered by Colonel Michaelis and his men. Although Colonel Freeman and his troops did not clash with the enemy head on as the 27th Regiment had done, he had the crucial task of protecting the area from enemy troops that had entered Gasansanseong Mountain Fortress to the northeast of Daegu on Aug. 18 and prevent them from gaining a foothold in the city.

Toward the end of the Battle of Dabudong, the enemy gradually began to advance, but due to Colonel Freeman and his men, they had to retreat.

The day after our command post at Dongmyeong Elementary School was hit by a surprise attack (Aug. 19), I was getting a rundown of the events that had led to the attack when I received word from Army Headquarters that we were to have a visit from some important guests.

Our visitors were none other than the brains of the U.S. and ROK Armed Forces. Shin Sung-mo, the minister of national defense, and General Chung Il-kwon, the chief commanding officer of the ROK Army during the war, arrived first. They were followed by the top generals of the U.S. Army. From a distance, I saw a jeep approach our command post. But the U.S. 8th Army’s commanding general General Walton H. Walker was not riding in the passenger seat, usually reserved for the top ranking officer. He was sitting in the back seat. Riding up front was a four star general: General Joseph Lawton Collins, the chief of staff of the U.S. Army.

General Collins was the U.S. Army’s senior officer throughout the Korean War. That was due in part to the friction between President Harry S. Truman and Gen. Douglas MacArthur.

The general then asked everyone to gather around the command post of Colonel Michaelis’ 27th Regiment for a group photo. Among those present were the top officers of the ROK 1st Division and the top officers of the U.S. Army. It was a good feeling to stand shoulder to shoulder with the senior American officer with whom we had worked to fight off the North Koreans.

General Collins left not too long after the group photo session for Daegu, taking with him a group of senior officers and high ranking South Korean government officials.

What took place following their departure was either strange or lucky, depending how you want to look at the situation. 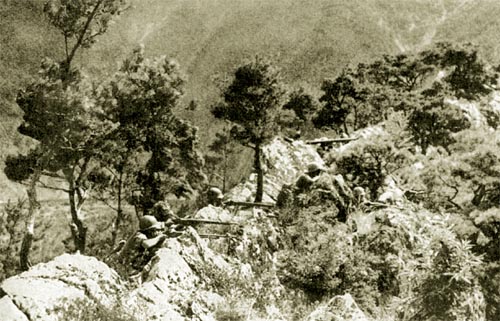 In August 1950, fierce battles ensued between the allied forces and enemy troops on Mount Yuhak and Mount Suam near Dabudong. Both sides suffered heavy casualties and U.S. troops had a difficult time fighting in the unfamiliar mountain terrain. Provided by the U.S. Army

Not long after General Collins and his entourage had taken off in their jeeps, we were hit by enemy artillery shells that landed near the very site where our guests had been.

We were fortunate that General Collins had left the site when he did, or President Truman’s special emissary could have been fatally wounded.

Including General Collins, General Walker, Lieutenant General Jung Il-kwon and me, a total of 13 top officers, could have been lost on that day. And that was excluding the majors of the U.S. 8th Army.

It was just one of the indications of the fierce enemy attacks that continued right up until the very end.

Using air and artillery support, the 12th Regiment launched their day and night offensive on Aug. 17, 1950.

The south-facing slope of the mountain that the 12th Regiment had to climb was very steep, while the north-facing slopes being used by the enemy troops were much easier to climb. To make matters worse, the final 50 to 70 meter stretch of the climb required our men to rock climb. We lost a countless number of men there.

As the ferocity of the battles picked up pace after Aug. 13, the number of casualties rose quickly.

The work of sending in reinforcement troops and equipment usually took place between 10:30 p.m. and 11:30 p.m. each day. When replacements arrived, the platoon leader would use a flash light to introduce himself to his newly-assigned men in the dark and then would organize battle formations by picking out a person who had at least a middle school level of education and appoint him the squad leader.

It was normal for platoon leaders to lose 80 to 90 percent of the replacements that had arrived the night before. Therefore, the platoon leaders would write down the names of the men on the covers of Army-issued Hwarang cigarette packs.

The focal point of the 12th Regiment was Hill 837, one of the peaks of Mount Yuhak. There were just three to four trails leading up to the top of Hill 837. However, the most intimidating portion of the climb was the final 70 meters, which consisted of a steep rock climb. If the enemy threw hand grenades down at our men during their climb, there was nowhere to hide.

We responded by organizing a company of three squads lined up one after the other. If the squad leading the pack took a hit from hand grenades or mortar fire, the next squad in line would move to the front and continue the climb. We lost so many men in action that the three companies combined made up a total of 100 men.

The brave men who took the heaviest hits were labor recruits who were often much older than the soldiers. They were some of the important figures who sacrificed their lives for their country, the people of South Korea, their families and their neighbors. They often waited until late into the night to quietly make their way up the mountain trails with supplies and ammunition.

Maj. Han Soon-hwa, the 1st Battalion Commander, stated that the labor recruits won half the battle on Mount Yuhak and that it would not have been possible for ROK forces to seize Mount Yuhak without the help of these men.

We also lost a large number of men at Mount Yuhak. The corpses piled up and the blood of our men killed in action flowed down from the top of the mountain like streams.