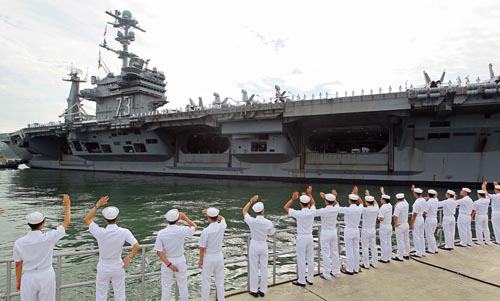 South Korean Navy sailors bid farewell to American sailors on the Nimitz-class USS George Washington as it leaves a port in Busan yesterday to take part in joint naval drills between the U.S. and Korea in the East Sea. The military exercise is one of the largest in decades. [NEWSIS]


South Korea and the United States kicked off a massive, four-day joint military exercise in the waters east of the peninsula yesterday despite North Korea’s threat of a nuclear “sacred war” in retaliation.

Code-named “Invincible Spirit,” the drill began yesterday morning with a 97,000-ton U.S. aircraft carrier setting sail to the East Sea from the southern port of Busan. Along with the nuclear-powered U.S.S. George Washington, 20 ships (including guided-missile destroyers), more than 200 aircraft (including F-22 Raptors) and 8,000 U.S. and South Korean servicemen are participating in the drill. Seoul and Washington have carefully described the drill as a defensive exercise, but also say they want to send a message to Pyongyang after its attack on the South Korean warship Cheonan in March.

A day before the drill began, North Korea reacted in a statement released by the country’s powerful National Defense Commission, headed by leader Kim Jong-il. The North threatened Saturday that it “will start a retaliatory sacred war of their own style based on nuclear deterrent any time necessary in order to counter the U.S. imperialists and the South Korean puppet forces deliberately pushing the situation to the brink of a war.”

“The army and people of the DPRK will legitimately counter with their powerful nuclear deterrence the largest-ever nuclear war exercises to be staged by the U.S. and the South Korean puppet forces,” the commission said in the statement released by the North’s KCNA. DPRK stands for North Korea’s official name, the Democratic People’s Republic of Korea.

Pyongyang also vowed to strengthen its nuclear arsenal amidst the stalled six-party nuclear talks to shut down the nuclear weapons program. “The more desperately the U.S. imperialists brandish their nukes and the more zealously their lackeys follow them, the more rapidly the DPRK’s nuclear deterrence will be bolstered up along the orbit of self-defense and the more remote the prospect for the denuclearization of the Korean Peninsula will become,” it said.

China has also opposed the exercise, reacting sensitively to military maneuvers near its territorial waters. After Beijing’s protest, the U.S. and South Korea moved this week’s drill, the first in a series, to the East Sea. Subsequent drills, however, are planned for the Yellow Sea.

While the South and the U.S. are trying to send a message to Pyongyang, Seoul faced disappointment in its diplomacy at the Asean Regional Forum last week. Diplomats from the two Koreas engaged in intense lobbying over a statement at the end of the summit, with the South hoping to get a condemnation of North Korea for the Cheonan’s sinking.

Ultimately, the foreign ministers at the forum “expressed deep concerns” over the sinking and expressed their support for an earlier United Nations Security Council statement on the incident. The ministers, however, fell short of condemning the attack, nor did they directly blame the North.

South Korean Foreign Minister Yu Myung-hwan said the forum’s support for the UN statement should be seen as a victory.

“The ministers said North Korea’s provocations are a threat to the region’s security, and I believe it was a good warning message to the North,” he said. “No one bought the North’s argument [that it was innocent]. They said it was not convincing.”

Yu also said more sanctions are being planned against the North.