Seoul’s face-lift may be half done

Seoul’s face-lift may be half done 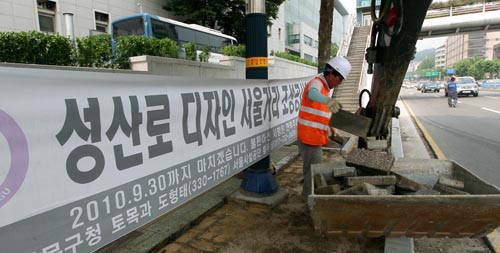 A construction worker gets rid of torn-up concrete to make way for a granite face-lift at Seongsanno, Seodaemun District, Seoul. By Oh Jong-taek

A giant yellow excavator roars onto a pedestrian walkway in front of Yonsei University’s Alumni Association Building in Seongsanno, Seodaemun District, and starts tearing up the surface concrete. At the same time, three construction workers busily pile up new road materials, which will eventually carpet the lane with handsome blocks of granite.

Oh has put his money (or the taxpayers’) where his mouth is. The refurbishment of 600 meters (1,969 feet) worth of streets in Seongsanno is costing 2 billion won ($1.66 million) with the Seoul city government paying 1.8 billion won and the Seodaemun District Office shouldering 200 million won. Thirteen areas come under the “Design Seoul Street” plan, and Seoul plans to create a further 20 design-friendly streets by next year.

But it’s uncertain whether Oh’s grand plan will survive the shift in power in Seoul’s city council earlier this month. Oh’s Grand National Party lost control of the council in the June 2 local elections, and the Democratic Party now controls 79 of the city council’s 106 seats. And they are skeptical about Oh’s design ambitions, including the Seoul Design Streets project and related initiatives like the Han River Renaissance project.

Political observers say even if Oh manages to persuade his city councilors, he faces more hurdles at the district level, where some of the funding for the project comes. The DP controls 21 of the 25 district offices in Seoul.

If the Seoul city council votes down or slashes budgets, Seoul’s design-related projects would be slimmed down drastically. A further complication is that district offices may ignore Seoul’s design guidelines created when Oh won his first term in 2006.

To improve the cityscape, the ordinance limits colors, sizes and numbers of shop signs on buildings. The policy was effective for the past four years, but Seoul’s city government can’t punish district office heads for not complying - the ordinance is a regulation, not a law, and thus not legally binding.

Jang Yeong-ho, an official with the Seoul city government’s facility design division, said DP councilors probably won’t recklessly ditch the design guidelines simply because they belong to a different political party. “The design guideline was created by experts, and it would improve and integrate the city landscape if [the district heads] respect it,” Jang said.

Mayor Oh made clear he will push for his design policies. “Given the fact that internationally well-known cities like London, Berlin and Yokohama aim to realize another [economic] takeoff with design, design is an essential element that influences the city’s future competitiveness,” Oh said.