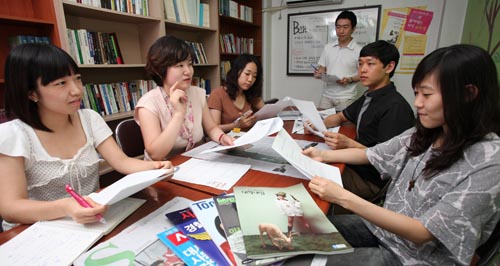 Students who publish a Webzine, “Bait,” had a meeting on July 19 to prepare for the publication of an off-line newspaper in September to promote conservative ideas. By Kim Do-hoon

Throughout Korea’s modern history, its university students could be relied upon to be liberal, anti-colonial, anti-authoritarian, pro-democracy, pro-unification and ready to hit the streets for a demonstration at the drop of a leaflet. In the post-democratization years, a good number of the country’s politicians, especially on the left of the political spectrum, started their careers as feisty, student radicals.

Today, however, an age of political apathy has dawned on Korean campuses.

Student councils, the very heart of politics at universities, don’t exist at Seoul National University and SungKongHoe University this year. Students at SNU planned a meeting on June 21 to discuss the procedures and to schedule an election for this year’s student council. But the meeting was canceled because of a lack of a quorum. In November and December of last year and last April, there were three botched elections to constitute a student council because so few students cast ballots. Instead, SNU appointed a council made up of student leaders from different academic departments. This is the only year that the university has not had an elected student council. Kim Ye-ran, 21, a student representative, said, “The students seem to be indifferent to the role of student council. They think there’s no problem in not having a student council.”

“Pluralism took roots in college students after democracy became established in Korea,” said Kim Hyung-jun, a political science professor from Myongji University. “There is little room for ideology to appeal to students when many college graduates cannot land jobs these days. College students are selecting their political views based on practicality rather than ideology.”

Student populations are also becoming less liberal. Last spring, the Ewha Womans University student council planned to join the Korean College Student Confederation, which has 73 member universities nationwide. The confederation, known for activism on nuts and bolts issues like reducing tuition fees, is far less liberal than its rival, the South Korean Federation of University Student Councils, which objects to U.S. troops from being on Korean soil. Nonetheless, posters started appearing in May protesting the university’s plan to join the federation because it is too close to the liberal, opposition Democratic Labor Party. The student council aborted its plan to join, saying the federation didn’t reflect the political views of the entire student body.

At both Sungkyunkwan University and Korea University, student councils held school-wide referendums before they joined the confederation.

Some students have even lurched to the far right. Since 2005, a group of conservative college students have published Bait (pronounced byte), a Web magazine that focuses on globalization, the market economy and human rights abuses in North Korea. “Our Webzine was created to build up a culture that discusses issues logically, which should be the role of school newspapers,” said Shin Bo-ra, 22, who is a senior at Myongji University and chief editor of the Web site. They plan to publish an off-line newspaper in September to advocate conservative ideas.

And on July 9, a conservative student alliance was created by 95 students from various universities. “People don’t know how to accept different ideas,” said Kim Keon-woo, 20, president of the alliance and a freshman at the Catholic University of Korea. “We cannot solve problems with just one political view, either progressive or conservative. We formed this alliance as there are no channels for conservative college students to raise their voices.”