Ji has opportunity for another first

Ji has opportunity for another first 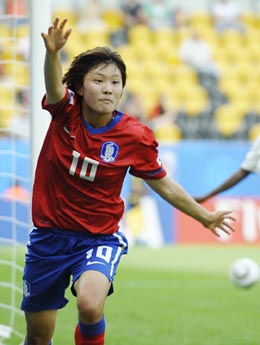 At the forefront of the young Taegeuk Ladies’ impressive run to the semifinals is Ji So-yun of Hanyang Women’s University.

With an upcoming match that features two of the top offenses in the U-20 Women’s World Cup, the 19-year-old forward has the potential to lead her team to the finals. At the same time, she could earn the distinction of becoming the first Korean player to rank as the top goal-scorer in a FIFA-sanctioned tourney. Ji has netted a total of six goals so far in the tournament and currently ranks second among leading scorers, trailing German forward Alexandra Popp by just one.

Recognized as one of the top forwards in the world, Ji has a habit of setting records. In the Group C opening match against Switzerland, Ji became the first Korean player - male or female - to score a hat-trick in a game at a FIFA tournament. She netted two more goals in the following game against Ghana and another against Mexico in the quarterfinals yesterday.

She also holds the distinction of being the youngest male or female Korean to play for a national team, joining the squad at the age of 15 years and eight months for the Peace Queen Cup tournament in October 2006.

Additionally, she is the youngest player in the country to score at an international match with a goal at the Doha Asian Games in 2006 at the age of 15 years and 10 months.

Ji is compared to Lionel Messi, an Argentine national and FC Barcelona team player, for her all-round game despite her diminutive size. She has the smarts, quickness and ability to work with both her feet to create chances for her teammates to score.