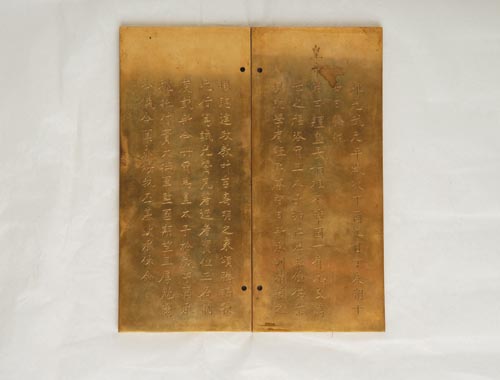 Name: Golden book for the investiture of the Crown Prince Imperial


This golden book was inscribed in 1897 when the Joseon Dynasty (1392-1910) was in the process of becoming the Empire of the Great Han, which also involved changing the titles of the royal family members. The title of “king” was changed to “emperor,” for example, and the rest of the titles were changed accordingly to suit an empire rather than a dynasty.

The book was inscribed to commemorate and establish authority of such a transition, despite the reality that the overall state of affairs was more like a candle flame about to be extinguished. Not only did the inscription establish new titles for the royal family, it also installed one of the sons of Emperor Gojong as the Crown Prince Imperial. He later became the last emperor. Inscribing important and authoritative texts on gold, jade and bamboo was a common practice in the royal family even after paper was widely used.