Return of the Sugar Plum Fairy

Return of the Sugar Plum Fairy 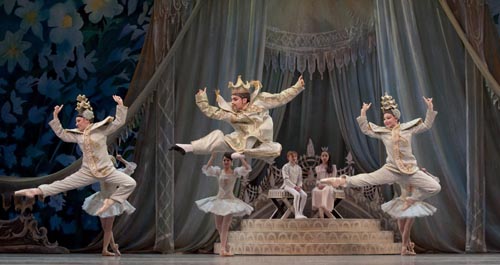 A scene from George Balanchine’s “The Nutcracker,” to be danced by the Oregon Ballet Theatre from Aug. 15-22 at Seoul Arts Center. Provided by the organizer


Those who are too busy or tired to go on vacation in this sizzling summer heat can take a quick trip to Christmas with the upcoming performance of Tchaikovsky’s holiday classic “The Nutcracker” in the middle of next month.

This performance of the ballet marks the Korean premiere of the version created by legendary choreographer George Balanchine. It will be performed by the Oregon Ballet Theatre.

One of the 20th century’s foremost choreographers and a pioneer of ballet in the United States, Balanchine in 1954 transformed the Russian work into a more festive version that families with children could enjoy during the Christmas season. At the time he was co-founder and ballet master of the New York City Ballet.

The Nutcracker tells the enchanting story of a girl named Marie (Clara in other versions) and the Nutcracker Prince, who take a thrilling journey to the candy-coated realm of the Sugar Plum Fairy.

The two-act original production of the ballet was created by Tchaikovsky, who adapted the story from “The Nutcracker and the Mouse King” by E. T. A. Hoffmann. It was staged for the first time on Dec. 18, 1892.

In the original version, some 50 dancers played up to four roles at once. Balanchine choreographed for a cast of more than 100 and increased the number of roles danced by children. The roles of Marie and the Nutcracker Prince are danced by children, for example, and their dances are made to be relatively less difficult than the ones performed by adults.

“[In] every point of this ‘Nutcracker,’ we’re children again. So much drama is about the loss of innocence or of paradise in some form, but here is an enthralling tale of innocence preserved and paradise discovered,” New York Times critic Alastair Macaulay said in his 2008 review of the ballet.

Some 50 Korean children were handpicked in advance by the company to take the stage with the OBT dancers, who will be here, along with Artistic Director Christopher Stowell, for the five-day performance run.

Born through a merger of Ballet Oregon and Pacific Ballet Theater in 1989, OBT ranks among other renowned troupes such as the American Ballet Theatre, NYC Ballet and Boston Ballet.