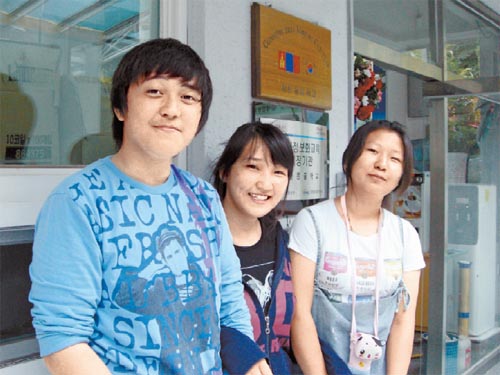 
The 16 middle-school students who graduated from the Mongol School in Gwangjang-dong, Seoul, on July 9, have found themselves at a crossroads. The school does not currently offer high school courses and they now face the prospect of attending new schools, either in Korea or back in their home country.

The Mongol School, established in 1999, is the only one in Korea specifically for the children of migrant workers from Mongolia. It helps students keep up with the Mongolian curriculum while also learning Korean.

As the Mongol School closely follows the school system in Mongolia, its academic year starts in fall and ends in summer like in Mongolia. This means that students can either go to middle school in Korea for the remainder of the Korean school year and then go on to high school or go back to Mongolia.

Of the 16 recent graduates, three are moving back to Mongolia and the rest are planning to attend Korean middle schools close to where they live.

“I’m going back to Mongolia next month with my dad because we decided that it’s too hard to study well and get into a good college in Korea,” said Dariimaa Baterdene. “I want to go to a Korean middle school with my friends here.”

Baterdene will go back to her home in Ulan Bator, the capital of Mongolia, but her mother will continue working in Korea. Baterdene added that she might come back to Korea after she graduates from college in order to be with her mother.

The students who will attend Korean middle schools next semester are both excited and worried about how the new environment will treat them.

“I’m very excited about going to a Korean school next semester,” said Chingis Ochirhuyg, who has been in Korea for two years. “But I’m a little worried about whether I can follow the Korean classes, because my Korean is still not good enough. I hope I can manage after previewing the school material over the summer vacation with teachers at the Mongol School.”

Although the school has been licensed by the Seoul Metropolitan Office of Education to operate from grades one to 12, it only has elementary and middle school courses due to inadequate funding and facilities.

According to Han Eun-kyoung, teacher and counselor at the Mongol School, most middle schoolers who choose to stay in Korea have also chosen to attend regular Korean high schools because vocational or engineering schools use difficult terminology. However, there is an advantage to attending such a school - many engineering schools provide special benefits to foreign students, such as scholarships, school uniforms and school equipment, as well as stipends.

“I’m a little scared about going to a Korean middle school. I’m good friends with the Korean kids who live near my house but I don’t know if I will be able to get along with people at Gwangjang,” Ochirbat said. “If I really can’t adapt to a Korean school, I might go back to Mongolia.”

Ochirhuyg chimed in, saying, “I heard that some people at school whisper as you walk by, make fun of you for being Mongolian or talk behind your back.” Han confirmed that the Mongol School graduates who attend Korean middle schools tend to worry more about making Korean friends than about exams and school work.

“The Mongol School students know that they might be treated unfairly in Korean schools,” said Han. “When our first graduates went to Korean schools in 2005, the problem was actually quite severe. But it has gotten much better. Although there is still a long way to go, I have really seen a growth in open-mindedness and acceptance at Korean schools over the years.”

According to Park Yong-gwan, the head teacher of academics at Gwangjang Middle School, students from the Mongol School generally adjust well to their new environment, but sometimes they stop coming to school.

“In 2008, some Mongolian students stopped coming to school without telling their teachers,” Park said. “When our teachers contacted them, they said they had to work and earn money. All we could do was notify the teachers at the Mongol School about what was happening.”

Han said the Mongol School provides support even to its graduates. “We are trying very hard to help graduates adjust to their new environments as quickly as possible,” Han said. “But sometimes they stop going to school or drop out completely. A few of them even go back to Mongolia.”

Han added that the school is planning to start construction on the Mongol High School next year.

“If students can continue attending the Mongol School, rather than graduating after they finish middle school, we’ll be able to prevent students from dropping out of school or getting menial labor jobs without getting a basic education,” she said.