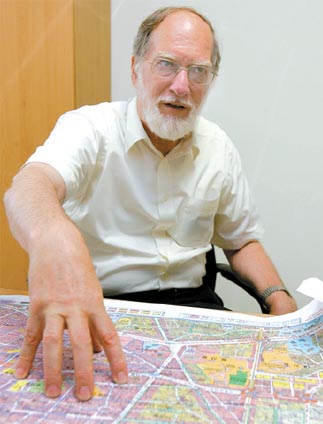 James H. Grayson, professor emeritus at the University of Sheffield, hopes to see the hanok in the Eupseong area of Daegu preserved. By Song Yee-ho

James H. Grayson, professor emeritus of Korean studies at the University of Sheffield in South Yorkshire, England, sighed as he looked at a map of Daegu’s Eupseong neighborhood, 30 years after he left the city in central Korea.

“The biggest hanok [traditional Korean house] in Eupseong used to be right here,” he said, pointing to a spot on the map during an interview in his office at Keimyung University. “It had a very high front gate. Now it’s a parking garage.”

The Eupseong neighborhood is part of the city’s old quarter and used to be surrounded by the city wall. Now, it is a bustling section of downtown surrounded by four major roads. It is known for the large number of hanok that have stubbornly remained standing, despite so many having being replaced by modern architectural structures.

Grayson first arrived in Daegu as a missionary in 1973. He stayed in the city until 1980, teaching religion at Kyungpook National University and Keimyung University. It was during that time that he became fascinated with Korean culture.

He returned to Daegu last October when Keimyung University invited him to serve as a visiting professor for the first semester of the school year. However, the Korea he encountered had changed drastically since he had left, and the whole city had become a jumble of buildings and blacktop.

He made his first visit to Eupseong with what he described as a sense of dread. When he arrived, most of the hanok had been demolished and replaced by parking garages. The rest had either devolved into restaurants or were left deserted.

Not content to watch the neighborhood fall further into ruin, he took action. He began cataloguing each of the hanok in the area, with the hope that he could contribute to their preservation.

“Beginning in March, I began a full-fledged exploration of Eupseong whenever I wasn’t giving a lecture,” he said. “I researched each hanok in the area, starting from those most worthy of preservation.”

Before he returned to England last month, he submitted a report on Eupseong to the city of Daegu and the Jung District Office.

In his report, he provided details about the location, condition and features of each structure, as well as his recommendations on renovation. The report includes descriptions of around 130 hanok, including one that was the home of poet Lee Sang-hwa.

In addition to the hanok, the study also includes more than 50 Japanese-style buildings from the Japanese colonial period and a few buildings constructed right after Korea gained its independence.

“Eupseong is a microcosm of Korean history,” the professor said. “Dalseong, next to Eupseong, is a historic Iron Age site. It has the Supreme Local Government Office [Kamyoung] from the Joseon Dynasty and traces of the Japanese colonial period. Writers and artists flocked here during the Korean War. And you never know what other historical remains might lie underneath.

“I hope Daegu can preserve and restore the area after officially designating it as a cultural heritage site - before it’s too late.”

Grayson has witnessed successful preservation projects in his home country. The City of Sheffield, England, where Grayson lives, excavated and preserved Victorian structures, historical ruins from World War II, and medieval streets and wells. In an adjoining county, the City of York, one of England’s oldest cities, preserved its city wall and the traditional houses built during the Roman, Anglo-Saxon, Viking and Medieval periods.

“Korea’s city planning departments seem to have no interest in history. They keep putting up the same buildings,” he said. “Since they have already achieved their goal of becoming a developed country to some degree, I hope they will turn their attention to their own culture and history, and transform Daegu’s Eupseong into Korea’s York. That’s why I submitted the report.”

Professor Grayson suggests that keeping the hanok occupied could help with their preservation. Hanok owners, for example, could convert the houses into bed-and-breakfasts.

“I feel a pang of regret when I see old alleyways and houses with historical and cultural value disappear because of thoughtless development,” he said. “I hope that they can be preserved.”