It was about 7:30 p.m. on the No. 5 Seoul Metro line on an ordinary weekday earlier this month. Inside the packed train, filled with countless commuters, a man in his 60s loudly scolded a twentysomething woman sitting across from him.

Both were sitting in “noyakjaseok,” which literally translates into “seating for the elderly and the infirm,” and he publicly attacked the stranger for occupying a seat in which she did not belong.

The woman, whose contorted face was a telling sign of her illness, staggered to her feet and moved to the other corner of the car as the rest of the occupants watched. Far from being deterred by her clumsy movements, the man raised his voice and continued to preach: “A woman of your age should never dare to sit in priority seating.”

Some may argue the woman had run into a bit of bad luck on that particular day, but many others would say that such an incident - being criticized by senior citizens for intruding on what they perceive as something off limits to members of the younger generations - could befall anyone.

“One morning when I was in the eighth month of my pregnancy, I was sleeping in one of the priority seats on my way to work. An elderly man entered the car, shook me awake and bellowed at me to yield the seat. I couldn’t help but burst into tears,” said Park Eun-jung, a mother in her early 30s.

“I don’t think noyakjaseok exist only for senior citizens. People should be able to sit there if they are physically weak, even if they are young,” Park said. 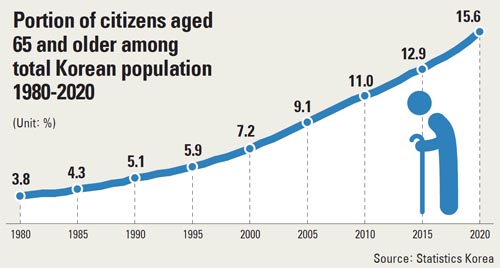 The generational discord over priority seating has even resulted in criminal cases. In early 2008, a 66-year-old man was arrested by police without detention for assaulting a 25-year-old woman for sitting in a priority seat. The police discovered that she was sick with a cold and that the old man was drunk. Four years ago, a man in his 50s killed another in his 60s during a fight over a priority seat on subway line No. 2.

In theory, Park’s views are in line with the original conception for noyakjaseok seating. The horizontal pictogram next to each set of seats in that section shows a man with a cane, a pregnant woman, a wounded man with a crutch and a woman carrying a child. The previous version of the pictogram was even accompanied by a message in Korean and English that said: “Seats for the handicapped, old, weak, pregnant woman, or accompanied with baby.” [sic]

However, interpretations of how the seats should be used, and by whom, seem to vary by age group. Now, the seats have become a symbol of the conflict between the old and young, as the country rapidly transforms into an aging society.

Data from the state-run Statistics Korea in May showed that the proportion of the population defined as senior citizens, those aged 65 or older, had jumped by more than 30 percent in just five years to about 4.36 million - and five years after the elderly population first exceeded 3 million.

The number of seniors in the population as a whole nearly tripled from 3.8 percent to 9.5 percent from 1980 to 2006, the last year related data was available. The statistical office projects that the figure will reach 15.6 percent by 2020, meaning that more than one out of 10 Koreans will be a senior citizen by that time. At this pace, experts predict the country will become a so-called “aged society” three years from now, just 13 years after it was designated as an “aging society” in 2000.

“A large number of senior citizens still tend to believe that priority seats belong exclusively to them, probably because of [how the seats] originated,” said a spokesman with Seoul Metro, which operates subway lines No. 1 through 4. “Accordingly, the trouble over the seating can’t be avoided.” 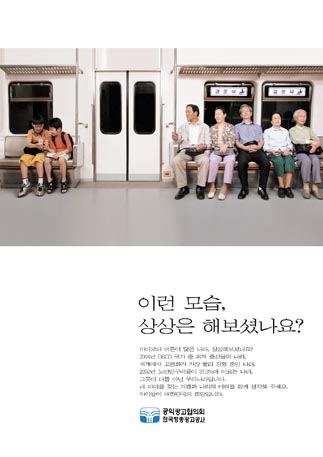 This public advertising campaign that was displayed around the country in 2006 shows an imaginary scene in which there are more priority seats than ordinary seats as Korea rapidly turns into an aging society. The slogan says: Have you ever imagined this?

The history of noyakjaseok dates back to the early 1980s, when the Korean government enacted laws giving special treatment to senior citizens aged 65 years and older. In addition to issuing complimentary passes for buses and subways to seniors, as well as for parks and ancient palaces, the government also installed seats on city buses specifically for seniors.

The series of welfare measures aimed to revive the Confucian tradition of respecting the elderly and practicing filial piety, the government said. Years later, subways followed suit - with priority seats, instead of seats just for the elderly.

At present, one-third of the seats on city buses in Seoul are designated as priority seats, while 12 out of 54 seats in a subway car are reserved for the elderly and infirm.

“We are currently deliberating additional measures to have more people follow the original purpose of priority seating,” the Seoul Metro spokesman said. “We are concerned the most about women in early pregnancy since it’s hard to tell it from their figure and they could easily become the target of attacks from the elderly.”

In a month or two, the subway operator will display a new pink pictogram showing a woman with a clearly visible fetus in her womb to underline the fact of her pregnancy, he added.

Four years ago, the Welfare Ministry launched a national campaign in which it distributed free badges and key rings with an illustration that depicted a woman with a red heart to indicate that she was pregnant. These items are still available at local health centers and OB-GYN clinics. But women with children say the accessories have not helped much in their struggle to get seats.

“First, few people recognize the meaning of the badge,” said Patty Choi, who had a baby four months ago. “Second, I can’t put it on every time I take public transportation.” 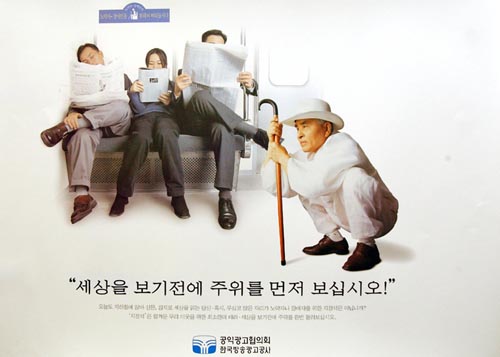 A 1999 public campaign encouraged young people to yield seats to the elderly in subway. The slogan reads: Look out for your neighbor before you go off to see the world! Provided by the Korea Broadcasting Advertising Corp.


The problem is compounded because Koreans are generally reluctant to make a public issue of unruly senior citizens - doing so goes against the social norm of showing respect to the elderly.

“What can we do about it? We just have no choice but to bear it because we can’t change older people,” said Lee Youn-seok, a 32-year-old office worker who commutes by subway every morning, when asked about the matter.

But not all young people seem to agree with Lee. Last September, when an anonymous Internet blogger mused in a post whether the elderly or pregnant women should be given priority seating on the subway, it sparked an online debate about the general issue of priority seats that continued for the next three months. The post garnered some 370 replies during that time.

Anonymous netizens shared their own bitter stories about times when they were humiliated by an elderly person for sitting in a priority seat. Some argue the seats must be left empty even when the subway is packed, while others say that anyone can sit there and yield the seat when a person in need approaches. The more radical responders disparaged seniors by saying a sizable portion of younger generation is exhausted from hard work and study, whereas the elderly are just passing the time on a free subway ride. In a display of animosity towards older people, some said that the free passes should not be given to seniors during rush hour.

The Korean Senior Citizens Association, the nation’s biggest senior citizen interest group, refused to comment on its position on the dispute. The spokesman said the association “does not want to be taken in by the tricks of the media.”

“It is true that there is a strong premium on being older in the Korean society,” said Choi Sung-jae, professor of social welfare at Seoul National University. “Even when as an older person you don’t behave yourself, you still believe you have the authority to reprimand those who are younger than you are - for the same behavior. The older generation should definitely reflect on this belief.”

Korea’s younger generation has been taught to respect the elderly simply because it is morally and ethically right. Yielding seats to seniors is a cultural norm, although seniors take it for granted, Choi said. Some foreigners and expatriates here praise the tradition, he added, and Korea has taken pride in being a “country of courteous people in the East.” But morality and ethics is far from being scientific and logical, the professor said, and that is why young people are increasingly resisting the traditional practices imposed on them.

“Both the younger and older generation are financially insecure in Korean society,” said a corporate retiree in his mid 60s who refused to be named. “It seems like both parties are shifting their insecurity and sense of deprivation onto each other. To seniors, a young person’s act of dominating priority seating can seem like an attempt to threaten their last remaining territory.”

Another retiree in his early 70s said, “Why would I want to burden youngsters? But to be honest with you, it’s not easy to bear the physical hardships of aging. I love it when young people give me their seats. I think seniors should at least be generous enough to express their gratitude to those who show them respect.”

The solution seems to boil down to the creation of mutual understanding.

“It is high time for the country to come up with a more reasonable and systematic means to get both parties to understand each other better,” Professor Choi said.

“Even in more economically advanced countries such as the United States, where the system of capitalism undervalues those with lower productivity, understanding seniority is part of the academic curriculum. This is to teach that everyone grows old and thus the younger generation, which is healthier and stronger, should be more considerate of them.”