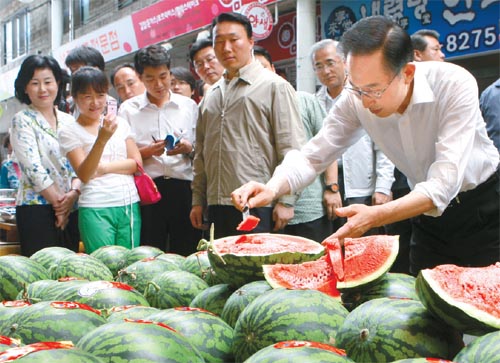 President Lee Myung-bak, right, tastes a watermelon at an outdoor market in Hwagok-dong, Gangseo, Seoul, on July 22, after he visited a branch of the Smile Microcredit Bank and blasted conglomerates’ capital firms for charging steep interest rates. By Cho Mun-gyu


Despite the Lee Myung-bak administration’s image of being super business-friendly, relations between the Blue House and the nation’s conglomerates appear to be on the brink of a precipice.

Since the June 2 local election defeats, Lee has increasingly made critical comments about the conglomerates’ business practices, a sharp reversal from the past.

“I believe conglomerates can truly succeed only when they understand the sentiments of the lower class and care for the minority in society,” Lee said when he visited the city of Seoul’s youth job training center on June 11. Since then, he has been repeatedly stressing the social responsibility of conglomerates.

Lee’s criticism peaked when he visited a branch of the Smile Microcredit Bank on Thursday. “Conglomerates rake in hundreds of billions of won in profits, but the poor people are suffering ever harsher hardships, so the companies should feel pressure,” Lee said. “Instead of being pressured [by the government], the conglomerates must feel socially responsible.”

Lee went on to say he believed it was wrong for conglomerates to engage in “loan-sharking” by operating “capital firms” that offer loans with high interest rates.

The next day, Lee told senior Blue House secretaries: “I am not coercing the conglomerates, but I am telling them to play fair. They have a large amount of cash on their hands, but they are not making investments, worsening the hardships of the working class.”

Lee was once CEO of Hyundai Engineering and Construction. His new, anti-conglomerate tack stems from the local election defeats of last month, a surprise for the Blue House and the Grand National Party because the approval rating of the government was over 40 percent at the time. Sources at the Blue House said Lee received various reports analyzing the situation immediately after the elections.

“The working-class people were increasingly furious the more the economic index improves and the more the conglomerates record profits,” the sources said, quoting a report submitted by the political affairs senior secretary’s office at the time.

Blue House aides handling public and civil affairs briefed the president that working-class people felt left out of the economic recovery. “We concluded that the administration and the ruling party were victims of their own success, as the swift turnaround from economic crisis developed into a kind of poison in local politics,” a ruling party source said. “As the resentment spread fast toward the conglomerates, the Blue House had no choice but to shift to a stronger working-class friendly policy.”

Sources also said Lee apparently ran out of patience with the conglomerates. Shortly after winning the presidency, he urged the business community to create jobs and increase investments. With no drastic changes in the conglomerates’ practices over the first half of his term, Lee’s frustration boiled over, a Blue House official said.

“The conglomerates have enjoyed the benefits of government policies, including the foreign currency measures, but they hesitated to make investments and create jobs. That’s the key to the president’s discontent,” the official said. Blue House aides also feel irritated that the conglomerates were enjoying profits, while the government faced fierce public criticism.”

The Blue House, however, warned against the view that it was engaged in conglomerate-bashing for political purposes.

“The president’s attempt to find a model of co-prosperity between conglomerates and small companies is different from the past administration’s populist, anti-conglomerate policy,” said a senior ruling party official.

“A centrist pragmatism and working-class friendly principles have always been Lee’s philosophy,” said a senior Blue House official. “It should not be seen that Lee’s ideological coordinate has leaned to the left.”