Yu under fire for exasperated remark in Hanoi

Yu under fire for exasperated remark in Hanoi 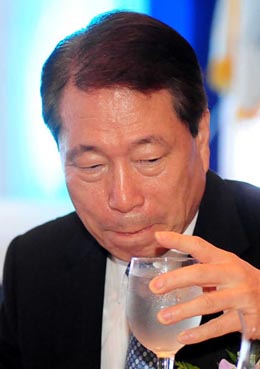 Foreign Minister Yu Myung-hwan put his foot in his mouth at an Asean summit and is now being hounded to resign.

The minister’s controversial remarks came in a question and answer session with reporters at the Asean Regional Forum (ARF) in Hanoi on Saturday. Yu’s delegation was frustrated in its attempt to get a strong statement from the summit about North Korea’s sinking of the warship Cheonan in March.

When Yu was asked about the possibility of an additional provocation from the North in response to the South Korea-U.S. joint military drills that started on Sunday, he shot back by asking whether the South should continue to be servile to the North even after the attack on the Cheonan.

Then he started an attack on young, liberal South Koreans, saying their political views hindered Seoul in its reaction to Pyongyang.

“With this mentality, this country can’t hold up,” Yu said. “If they [young people] like North Korea so much, they should go live under Dear Leader Kim Jong-il.”

Foreign Ministery spokesman Kim Young-sun defended Yu, saying, “The remark was aimed at stressing the importance of a unified stance of the public to prevent another provocation.”

The ARF’s statement about the Cheonan was even weaker than the July 9th UN Security Council statement.