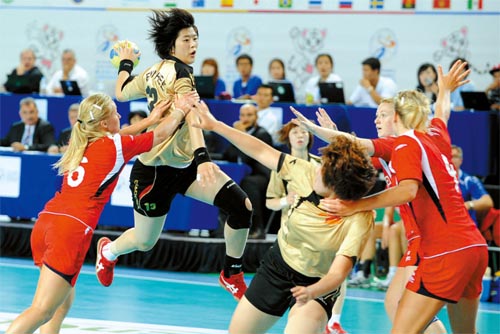 Ryu Eun-hee of Korea attempts to release a shot in midair against Norway in the Women’s Junior Handball World Championship 2010 yesterday.

Having secured a place in the semifinals with a win over Germany on Sunday, Korea won its final main round game, 30-26, in Seoul yesterday. Korea is undefeated in the tourney, having won eight consecutive matches.

After finishing the main round with the best record in Group 1, Korea will face the second-place team in Group 2 in the semifinals on Thursday in Seoul. Russia, Hungary and Montenegro are battling for spots in the final four out of Group 2. [NEWSIS]