History, as seen through the eyes of Asian realists

History, as seen through the eyes of Asian realists 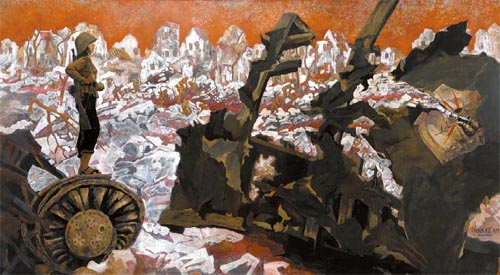 In an exhibition hall at the National Museum of Contemporary Art (MOCA) inside Deoksu Palace in central Seoul, there sits a 1944 painting by a Japanese artist depicting Japanese soldiers energetically rebuilding a bridge on the Malay Peninsula that helped the country’s army invade Singapore in 1942. On the opposite wall hangs a 1963 painting by a Singaporean artist depicting a group of Chinese in Singapore being brutally hauled away by the Japanese Army to be killed.

Both works are based on factual events and are painted in realistic ways, but they also reflect striking differences in each painter’s view of history.

The works are part of the exhibition “Realism in Asian Art,” which began yesterday at the Deoksu Palace branch of MOCA and will continue until Oct. 10.

The show features more than 100 paintings dating from the late 19th century to the 1980s by about 40 artists from 10 Asian countries, including Korea, China, Japan and India.

“Realism can be defined both as a form of representation and the artist’s attitude ... But realism is more a matter of attitude than format,” said Kim In-hye, co-curator of the exhibition. 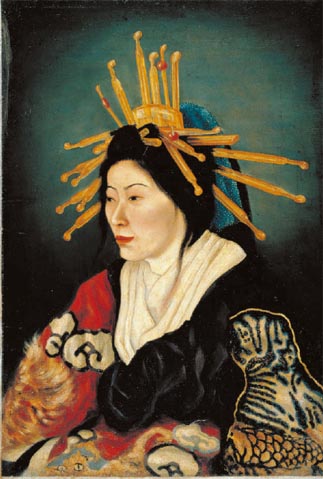 “Hanoi Christmas Bombing of 1972” (1985) by the Vietnamese artist Phan Ke An (top) and “Courtesan” (1872) by the Japanese artist Yuichi Takahashi (above) are part of the “Realism in Asian Art” show. Provided by MOCA

As a form of representation, realism encompasses the techniques developed by Western artists from the Renaissance period. These techniques include an elaborate use of perspective and chiaroscuro, both of which make the paintings look realistic.

Section One of the exhibit features works by Asian artists from the late 19th and early 20th century who actively adopted such Western techniques. One of the works is the oil painting “Courtesan” (1872) by Yuichi Takahashi, which is being displayed outside Japan for the first time. While the head of the courtesan is depicted three-dimensionally, the rest of the image appears rather flat, showing the artist’s transition from the Japanese tradition to a more Western style.

When defined as an attitude, realism is the artists’ focus on depicting things as they see them.

But even realist paintings are not always objective, Kim said.

“Realist paintings easily become a means of propaganda, as they can easily be understood by the public,” she said.

That is true of the two paintings mentioned above: “Engineering Corps Constructing a Bridge in Malaya” by the Japanese artist Toshi Shimizu and “Persecution” by Singaporean artist Koeh Sia Yong. According to the museum, the former was painted to justify the Japanese Army’s invasion, with its inclusion of amicable Malaysian locals. The latter was produced to support the move by the Singaporean Chinese Chambers of Commerce to demand compensation from the Japanese government for the massacre.

“We present all these paintings in a neutral way so that viewers can think about them themselves,” Kim said.

Section Four also contains paintings depicting the Korean War, the Vietnam War and other conflicts in Asia and the people who endured them.

The paintings in Section Four - along with those in sections Two (rural paintings), Three (paintings of laborers) and Five (paintings of social criticism) - show how surprisingly similar the experiences of Asian countries can be, said Joyce Fan, the Singaporean co-curator of the exhibition. This includes the cultural impact of the West, colonization and resistance, political upheavals and ideological conflicts, she said.

“Through the exhibition, viewers will discover how we [Asians] are connected,” she said.

The exhibition was co-organized by MOCA and the National Art Gallery, Singapore. It was held in Singapore for three months at the Singapore Art Museum through July 4 and has now come to Seoul.

MOCA said it has taken three years to prepare for the exhibition and that it has had difficulty in obtaining the pieces it wanted to include, because some countries rarely let the artworks leave.