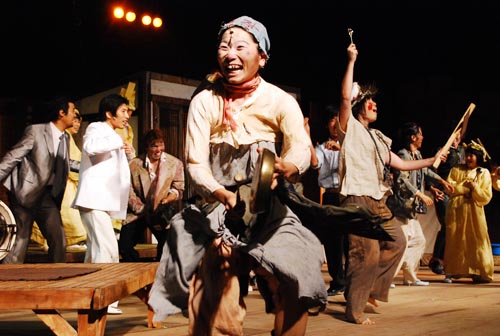 Today: Nanse Gum, the man known as the Leonard Bernstein of Korea, will lead the Gyeonggi Philharmonic Orchestra in renditions of Saint-Saens’ “Le Carnaval des Animaux” and Benjamin Britten’s “The Young Person’s Guide to the Orchestra.”

Gum, who aims to bring classical music to the public, left his position as conductor of the prestigious Korean Broadcasting System orchestra in 1992 to join the Gyeonggi Philharmonic. He is also the founder and artistic director of the Euro-Asian Philharmonic Orchestra, which was established without any government subsidies.

Thursday to Friday: World Vision, an international humanitarian organization founded 50 years ago to help Korean orphans and widows, also founded SunMyung Choir. The choir won first place at the International Choir Festival sponsored by the BBC in 1978. Since then, it has been known as one of the best children’s choirs in the world.

Friday: This is the third installment in the popular monthly Feel-Up DJ series. Feel-Up began with the goal of taking deep house sound to as wide an audience as possible while at the same time showcasing local DJs who are often overlooked in favor of touring international DJs. This week the guest is Seoul-based DJ and producer Chiman. Chiman recently created a buzz in the global deep house scene with his masterful reworking of Sergio Mendes’ “Mas Que Nada,” featuring the Black Eyed Peas. He’s also getting attention for other remixes, including his deep house interpretation of “Dancing” by new K-pop dance act Ribbon Society.

Friday to Saturday: The Seoul Metropolitan Youth Orchestra is holding a series of educational concerts for parents and children from elementary to high school.

This concert will include “Waltz of the Flowers” from “The Nutcracker,” “Gershwin Piano Concerto in F” and “The Young Person’s Guide to the Orchestra.”

Announcer Oh Sang-jin will talk about the instruments being played, the history of the music performed and concert etiquette.

Saturday: The program includes: the overture from Rossini’s “The Barber of Seville”; Mozart’s Sinfonia Concertante for 4 Flutes in E Flat Major, K. 297b; Mercadante’s Concerto in E Minor, Op. 57; and Beethoven’s Symphony No. 5 in C Minor, Op. 67, among others.

Saturday: This ensemble has worked to bring classical music to the public since its founding seven years ago. The program includes: Handel’s Concerto Grosso in D Major, Op.6 No. 5; Mozart’s “Twelve Variations on ‘Ah vous dirai-je, Maman,’ K. 265/300e”; Pachelbel’s Canon in D Major for strings; Sarasate’s “Navarra” for two violins and orchestra, Op 33; and Vivaldi’s “Summer” from Op. 8, No. 2., RV 315.

The group, founded in 2008, was the subject of controversy last fall when lead singer Park Jae-beom was ejected following allegations that he had made negative remarks about Korea on his personal blog.

The group will perform hit songs such as “Heartbeat,” “Without U” and more.

The orchestra was founded in 1997 by Chung and other Asian musicians and quickly became one of the best orchestras in Asia.

Chung once performed with his sisters - violinist Chung Kyung-wha and cellist Chung Myung-wha - as the Chung Trio.

Aug. 10 to Aug. 21: This festival features performances by the National Chorus and choirs from cities of Seongnam, Gwangju, Wonju, Daegu, Anyang, Daejeon, Ansan, Suwon and Goyang. The choirs will present music from various genres, from traditional Korean songs to modern choir music.

The concert starts at 8 p.m. on weekdays and at 7 p.m. on Saturdays.

Aug. 14 to Aug. 26: Turandot was the last opera Puccini produced, and it is perhaps most famous for the aria “Nessun Dorma” (“None Shall Sleep”).

The princess, Turandot, is the vixen at the center of the story. She punishes her suitors by asking them to solve her riddles before beheading them when they fail. Only one man, Prince Calaf, is up for the challenge, and he vows to win her heart.

This play is a farce about a grandmother who is preparing her family for her death and about how the family deals with her death once she has passed away.

After she receives a message from her late husband telling her she is going to die, the grandmother asks her children to prepare a gut (a shamanic ritual performed to send the spirit of the deceased to heaven). Although they resist, the ritual is performed and long-buried family secrets are revealed in the process. After the grandmother’s death, however, the real fight - over the inheritance - begins.

Renowned actress Gang Bu-ja, who has appeared on stage, television and film, plays the role of the grandmother.

Performances are at 8 p.m. Tuesdays, Thursdays and Fridays, at 4 and 8 p.m. on Wednesdays and at 3 and 7 p.m. on Saturdays. There are no performances on Mondays.

Aug. 5 to Aug. 11: This ballet company was founded in 1967 by choreographer Konstantin Boyarsky and follows the traditions of the legendary St. Petersburg ballet school. The company has presented more than 6,000 performances in theaters around the world.

THE ROAD TO MECCA

Aug. 6 to Aug. 22: This play was written by Athol Fugard, one of the most critically-acclaimed playwrights in South Africa.

The play depicts a lonely human being’s journey to find an identity and the true meaning of life. It tells the story of a widow who lives alone. To keep herself occupied, she has filled her home with pieces of broken glass, and her garden with sculptures of people and animals - all facing Mecca. Her behavior draws the attention of her conservative church, who view her actions with suspicion and place her in exile.

Aug. 12 to Aug. 15: This performance of the Mozart classic will be accompanied by a number of activities for children, such as face painting and 3-D video displays.

To Aug. 11: Jin Ok-sub, the artistic director of Kous, gained recognition as the director of the dance scenes for “The King and the Clown” (2005) and was once a dance critic. However, few people know that he has spent many years scouring the country in search of the “true” masters of traditional Korean dance. With this performance, he brings some of these masters to the stage.

Performances are on Wednesdays at 8 p.m.

Friday: This performance celebrates poongryu, which originated from the Korean character and Koreans’ love of nature. It features various traditional music and dance forms.

Aug. 4 to 9: The fifth annual Busan International Magic Festival is Korea’s only magic festival. Featuring three dozen magicians from Korea, the U.S., France and Germany, the festival includes magic galas, shows and competitions, as well as magic shows for children.