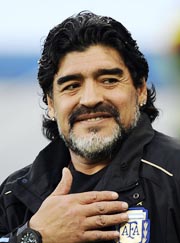 BUENOS AIRES - Diego Maradona’s future as coach of Argentina will be decided at a meeting of football association bosses today, a spokesman for the organization said.

Maradona met the head of the Argentine Football Association (AFA), Julio Grondona, this week for more than two hours to determine whether he will continue as coach following Argentina’s 4-0 defeat by Germany in the World Cup quarterfinals.

“They had a long meeting and analyzed the current state of the team and his future,” AFA spokesman Ernesto Cherquis Bialo said yesterday.

“A decision will be made tomorrow. I can’t say if an agreement was reached. The president has drafted a report and will present it to the AFA executive committee.”

Maradona told local media over the weekend that he wanted to stay as coach, but only if he could keep control over the choice of his assistants.

“I want to continue. Whether I stay will be decided in the meeting I’ll have with Grondona... and the outcome of that will depend on what he wants and whether he accepts what I ask of him,” Maradona told Argentine television in his first comments to local reporters since World Cup elimination.

“Continuing means taking charge and having the people I want,” Maradona added, alluding to media reports that the AFA would ask him to replace some key members of his coaching team.

“There’s no way I’ll continue as coach of the national team if they want to take [Alejandro] Mancuso or [Hector] Enrique away from me... or if they want to impose someone or other on me.”

Maradona, a World Cup winner as a player way back in 1986, has endured a patchy performance as coach of Argentina.

He defended his team’s performance in South Africa this summer despite its painful exit.

“We didn’t deserve to finish that way, we had done good work,” he said.