The return of Machiavelli?

The return of Machiavelli? 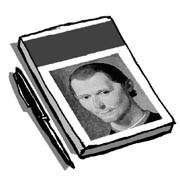 The Basilica di Santa Maria del Fiore, which stands in the center of Florence, Italy, was the first octagonal stone tower built in the West. It is the symbol and the pride of Florence, the city of flowers. It is also the place where the young lovers of the novel and film “Between Calm and Passion” met to keep the promise they had made 10 years before.

The basilica had a particular meaning for Niccolo Machiavelli (1469-1527), too. Nanami Shiono, author of “The Story of the Romans,” wrote, “Reminded of the surging anger that Machiavelli might have directed toward himself while watching the basilica from a mountain cabin not far from Florence after he was inexplicably expelled from his government post, I made up my mind.”

It is said that Machiavelli, who hailed from Florence, lived his life while sharing highs and lows with the basilica. As he loved “his fatherland more than his soul,” he must have thought, while writing his life’s masterpiece “The Prince,” that the duty of the monarch was to defend the basilica from outside invasion.

It is rare to find someone like Machiavelli, who continues to be the subject of controversy even 500 years after his death. He was considered a cold-hearted theorist who advocated an autocratic monarchy. He was also regarded as the incarnation of all sorts of trickery. One representative example is the fox and the lion metaphor. He emphasized that “the Prince should have both the power of the lion and the slyness of the fox.” He also suggested that “the Prince should be able to conduct an evil act if necessary” and recommended that he make use of the weaknesses of the human psyche.

At the time, Florence was only a small city-state that agonized over its own survival, as it was threatened by the powers around it. Therefore, Machiavelli thought that strong leadership was necessary to build a modern state. He did not intend to evaluate the autocratic monarchy. The Prince discusses the ways and means of winning and managing power in a monarchy.

“Korea needs someone like Machiavelli, not someone like Karl Marx,” Choi Jang-jip, an honorary professor at Korea University and a leading liberal scholar, once said in an interview with the JoongAng Ilbo. He also said that “Korea should open its eyes to the political techniques that Machiavelli emphasized.”

Upon reading Machiavelli’s writing on the qualifications of a prince - generosity versus parsimony and cruelty versus mercy - I found myself nodding in agreement.

Machiavelli also emphasized the importance of military preparedness when he said: “A country that is not prepared with self-defense capabilities is destined to end in destruction and subjugation.” His remarks are valid even today.

I think we would be wise to reflect on these ideas - or at least invite Choi to lead a discussion about his theories.