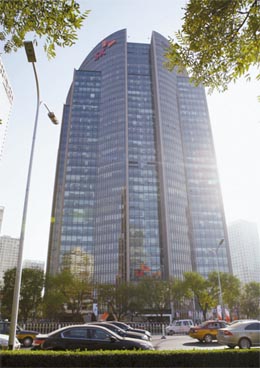 The gleaming SK Tower - which is the home of SK China - in Beijing.

With an eye on developing growth engines for the future, SK Group has decided to focus on a new type of business that revolves around continuous expansion and improvements for both the world in general and humans specifically.

Along these lines, SK will look to secure new energy resources, establish a “smart” environment and develop new industry enablers. These three “E’s” - energy, environment and enablers - will serve as the foundation of the company’s new strategy. SK Group plans to invest 17.5 trillion won by 2020 in this area as part of an aggressive strategy to become a leader in the field.

On June 30, SK Group Chairman Chey Tae-won and executives from the conglomerate’s other main subsidiaries participated in a meeting to hammer out details of the new strategy. 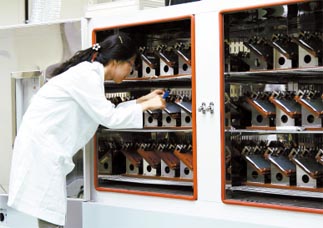 A researcher at the SK Institute of Technology tests a secondary battery for an electric car.

SK Group cemented plans to invest 4.5 trillion won in environmentally friendly, low-carbon power sources such as solar energy, bio fuels and other technologies, which is expected to help create roughly 11,000 jobs. Additionally, it will increase its investments in overseas resources. The group plans to secure 1 billion barrels of crude oil and gas by 2015 and 30 million tons of iron ore by 2020. It also will seek to secure yearly production of 24,000 tons of natural rubber in the same timeframe.

Through technology and overseas resource development, SK plans to increase its contribution to Korea’s efforts to become more energy independent, which is considered key for the country’s future.

By 2020, the group will invest 4.2 trillion won in a variety of efforts related to smart technology - including smart city systems and a smart grid - as well as projects tied to developing environmentally friendly materials. The idea is to bolster convenience and spur economic development in a way that has minimal impacts on the environment, the second part of its three-pronged strategy.

In the last primary area of focus - enablers - SK Group will invest a total of 8.8 trillion won in a variety of areas including advanced automobile technology, mobile health care treatment services and the development of new medicines. 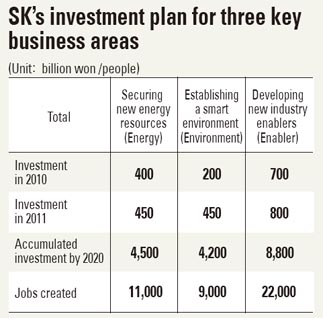 With the opening of its China headquarters, SK Group will increase its global strategic base operations, which also include South America, the Middle East and Southeast Asia. In China, a rapidly emerging market with huge growth potential, the group will look to localize its services for the unique needs of customers in the country. Earlier this year, the company finalized the overall structure and reorganization of its Chinese business and named Park Young-ho as the president and CEO of the new operation, called SK China.

SK China launched on July 1 will focus its portfolio on new energy, the petrochemical industry, city development and environmental technologies development, which are seen as key sectors for the future.

SK also has revised its strategies for South America, the Middle East and Southeast Asia. To reinforce its global business, the group plans to capitalize on its current strengths in energy, resource development, information and communications and construction. In South America, for instance, the group will concentrate on developing sources of crude oil, natural gas and iron ore by working with a liquefied natural gas production factory in Peru.

With this in mind, the group plans to expand its business to related fields such as plant construction. Subsidiaries SK Energy and SK E&C will each enter these markets.

“Improving the environment, developing green energy sources and upgrading the nation’s quality of life are the most important factors in continuous development,” said SK Group Chairman Chey. “SK Group’s goal is to contribute to national economic development and improve life in an innovative way.”