[In-depth interview] A female judge in a man’s world

[In-depth interview] A female judge in a man’s world 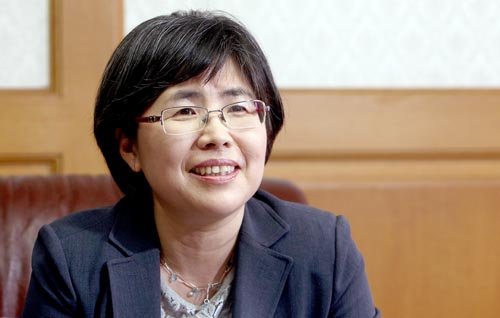 Kim Young-ran, the nation’s first female Supreme Court justice, will retire on Aug. 24. She served on the Supreme Court for six years. In a two-hour interview with the JoongAng Ilbo in her office, Kim revealed the emotional agony of being a judge for 29 years and 8 months, recalled her life as the first female justice, gave advice to younger female judges and candidly talked about her life.

Kim graduated from Kyunggi Girls’ High School and Seoul National University Law School and passed the judicial examination in 1978. Seoul Civil District Court in 1981 and was appointed as a Supreme Court justice in 2004 at the age of 48 when she was a senior judge at the Daejeon High Court.


Q. How do you feel as you end your career as a judge?

A. Judges always have to make a conclusion to all questions. I wondered whether I was fit to judge others, and that thought bothered me for a long time. I am glad to be free from this burden soon.

What was your ambition as the first female justice on the Supreme Court?

I realized that the reason I was appointed as a Supreme Court justice was to reflect minority opinions that do not often have political representation. I did my best to fulfill that role.

How do you think the appointment of a female justice changed the Supreme Court, which is a male-dominated organization?

The decision in 2005 that recognized women as members of a family clan is a great example of change [since 1958, only male adults can legally belong to a family clan, meaning the women did not have any clan-related property rights]. The judges had finished considering the case long before issuing a decision, but couldn’t reach a majority judgement. After I joined, however, the male justices said that the decision became easier. They felt that my joining the Supreme Court signaled a change in Korean society. I did not pressure them into making the decision. I think they just realized the necessity of gender equality in Korea.

Critics say that the composition of the Supreme Court became very diversified. Do you think any change is needed?

What do you think is necessary for reforming the judicial system?

The Supreme Court must unify the interpretation of the law to make every judgment fair and constructive. The judges should try to make all the concerned parties in the trial feel they were fairly treated.

Do you have any suggestions for other female judges?

What is the most memorable decision you made?

I was treated very unfairly after making few decisions. I decided in favor of a defendant who had made allegations against the father-in-law of Roh Moo-hyun during the presidential election in 2002. Later, I decided against a defendant who had made allegations against Park Geun-hye in the 2004 general election. Both violated the election laws, but they were based on different legal provisions. But on the Internet, someone compared the two cases as if they are identical, and made me look like I was affiliated with the Grand National Party. As a judge, I felt deeply offended by such accusations.

In 2008, a majority opinion held that the rights to hold memorial services for ancestors belonged to the eldest son, but you backed the minority opinion.

I felt this violated gender equality. There are many families with no sons, so I thought this idea didn’t make sense.

What if you had not become a judge?

I always loved writing. I might have been a journalist. I wrote two short stories for the school newspaper when I was attending college.

You went to same high school and university with Kang Kum-sil, a former justice minister under the Roh Moo-hyun administration, and Representative Cho Bae-sook of the Democratic Party. How are you three different?

They were very diligent in school. I was taking journalism classes and I remember not studying hard for the national bar exam.

You have been a prominent female judge since you completed the courses at the Judicial Research and Training Institute.

I felt that wherever there were few women, they were respected. I sometimes felt lonely, but I was never treated unfairly because of my gender. However, after being around so many men, I became very passive and developed strong feelings of self-censorship. I started to think too much about what others thought about me.

How was it raising two daughters and living with your in-laws?

I feel remorseful that I could not pay much attention to my children. The hardest times were when my parents-in-law were sick and my children were young. Living through those times was like going through a dark tunnel.

Your husband, Kang Ji-won, quit his job as the CEO of a law firm after you were selected as a Supreme Court justice.

I really thank him for that. He took care of himself and the family very well so I could focus on my job.

Why did you send your daughters to alternative schools?

In my opinion, many children live trapped lives since kindergarten to go to prestigious universities. I did not want my daughters to live like that. I wanted them to have a sense of adventure and enjoy the process of building their own lives. I particularly didn’t want them to be judges. [The elder daughter, 27 years old, is currently working for an advertising firm and the younger daughter, 23, is attending university.]

What are your retirement plans?

I have received a lot from society and the Court. I do not want to be a lawyer again. I want to live a different life. After six years on the Supreme Court, I realized that our society is struggling with many important issues. I want to look at how the judiciary can help resolve these conflicts.