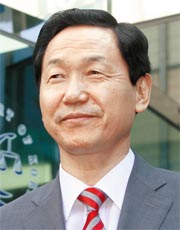 A local court yesterday acquitted two-term Gyeonggi education chief Kim Sang-kon, who was indicted in March for alleged dereliction of duty for refusing the Education Ministry’s order to discipline 14 teachers in the Korean Teachers and Education Workers’ Union who signed an antigovernment statement last June.

Prosecutors, who had sought a 10-month jail term for Kim, said they would appeal the case to a higher court.

“As there are divided opinions and controversy as to whether the teachers’ actions were illegal, the defendant [Kim] took a prudent stance by deciding to suspend disciplinary measures until the judiciary makes a final ruling on the teachers,” Judge Yu Sang-jae of Suwon District Court said in his verdict. “His action isn’t a breach of duty and malfeasance, as argued by prosecutors.”

Judge Yu said that when an education superintendent receives a disciplinary order from the Education Ministry, he or she has the right to determine whether the order has sufficient grounds to punish the teachers after thoroughly investigating the matter.

By law, Korean civil servants (including teachers) are supposed to be politically neutral. But many challenges have been made to how the law should be interpreted, especially by liberals. Judgments by courts have been inconsistent on the issue.

“Because the teacher’s antigovernment statement didn’t take place in a class, it didn’t violate the students’ right to learn,” Judge Yu said.

Prior to leaving court, Kim said, “Today’s ruling was a natural result.”

“The ruling proved that the Education Ministry’s pressing charges and the prosecutors indictment [of me] was an outrageous application and enforcement of the law,” Kim said.

In November Kim refused to punish the 14 teachers as requested by the Education Ministry, arguing that teachers have the right to express their opinions and that punishing them for protesting against the government is not appropriate. The ministry sued Kim for breach of duty in December.

“We will wait for the verdict of the appeals trial,” a senior education ministry official said.

Education observers suggest the court’s clearance will help the 60-year-old liberal education chief push policies that conflict with the current government, including providing free school lunches for all students.

Students in fishing and farming villages have benefited from the meal program in Gyeonggi, and Kim plans to expand the program to all elementary schools by 2012 and middle schools by 2014. Kim estimates the program will cost at least 661.3 billion won ($560 million) in 2014 and wants to maintain amicable relations with province councilors, who approve budgets.

Last year, the ruling Grand National Party took the majority of seats on the Gyeonggi council, and it slashed the entire budget Kim requested for free school lunches. This year, the opposition Democratic Party took control of the council in the June 2 local elections, winning 76 of the council’s 131 seats.