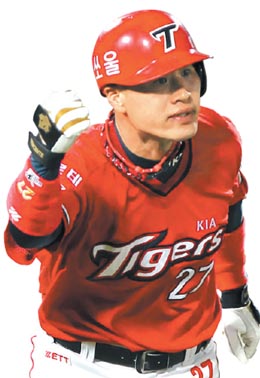 Despite lingering concerns about his readiness, Kim Sang-hyun of the Kia Tigers returned to action with a bang against the Lotte Giants on Tuesday night in Busan. The 30-year-old third baseman, who led the league in home runs and RBI last season en route to earning the most valuable player honor, drove in a run before popping a home run later in the game to help secure a win.

His return couldn’t have come at a better time.

The Tigers - who won the Korean Series last year - have struggled mightily on the offensive side of the ball this season, much to the surprise of the team’s fans.

Although the Tigers put up the lowest team batting average in the league last season, the squad boasted a powerful trio of Choi Hee-seop, Kim Sang-hyun and Na Ji-wan in the heart of the batting order. Add contact hitters like Lee Yong-kyu and Kim Won-seob, and Kia had one of the most feared offensive lineups in the Korea Baseball Organization.

However, the team has shown little of the power and clutch hitting that defined its lineup last season.

One of the biggest reasons is Kim’s extended absence, which was tied to a nagging knee problem that had been bothering him since spring training. Kim decided to undergo surgery on his knee, and as a result Kia had to do without him in April and May. Although Kim initially made a quick recovery and returned to action earlier than expected in early June, he injured the muscle above his right Achilles’ tendon while rounding the bases in a game.

Kim was initially scheduled to return to action prior to the All-Star break, but the date was pushed back after he experienced severe pain that delayed his recovery.

Kim, however, finally returned to action Tuesday against the Lotte Giants in good form. After hitting an RBI single in the top of the fourth with two outs, Kim swatted a two-run homer in the top of the eighth with his team trailing 3-2. Kim’s home run served as a turning point in the game, as Kia’s offense came to life and went on to win the match 7-5.

The return of Kim provides balance and relieves some pressure from the Tigers’ other power hitters.

“I don’t expect him to immediately perform like he did last year,” said Kia manager Cho Beom-hyun. “But his mere presence in the batting order will be a huge help to the other players.”

Kim is currently batting sixth after Chae Jong-beom in the No. 5 spot and Choi in the cleanup position. Since returning to the KBO from a stint in the minors in July, Chae has a seven-game hitting streak going. Having hit back-to-back home runs in the 10-5 loss against the Samsung Lions on July 22, Chae boasts a batting average of .391 in his last six games. The return of Kim and Chae is expected to be a huge help to the team offensively, as it now has all of its power hitters back in the lineup.

Despite a successful return on Tuesday night, Kim has not fully healed from his injury - which was evident in the top of the fourth when he stopped at first despite hitting what in most cases would be a double.