U-20 women gear up for finals push

U-20 women gear up for finals push

Members of the U-20 women’s national football team train at Bochum Stadium in Bochum, Germany yesterday in preparation for their semifinals match against Germany. [YONHAP]


BOCHUM, Germany - With his players beaming with confidence ahead of today’s critical match against Germany, Choi In-cheul, the coach of Korea’s U-20 women’s football team, said the championship trophy is within reach.

The team, which lacks a strong support base at home, has gained a following after reaching the semifinals with stellar performances.

Korea advanced with two wins and one loss in the group stage, scoring eight and conceding two.

In the quarterfinals, it routed Mexico 3-1 to win a berth in the semis, becoming the first Korean women’s team to reach the stage in a FIFA-arranged tournament.

“If we overcome Germany, we will be about 60 percent of the way to the championship title,” said Choi in an interview with Yonhap on Wednesday. “We will put up a good fight, as my players have great potential, and they are feeling very confident.” 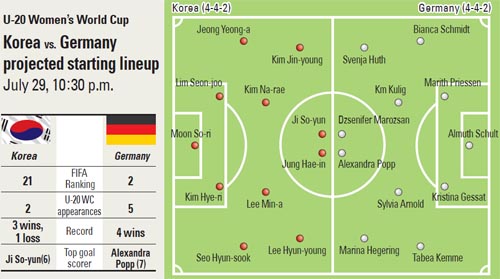 The team is counting on forward Ji So-yun to pull through when it matters most.

The 19-year-old striker, dubbed “Ji-Messi” in Korea, has scored six goals in the tournament and is eyeing the Golden Shoe, awarded to the top scorer, for the first time in the country’s football history.

Her main rival is Alexandra Popp of Germany, the world’s top team, who leads with seven goals.

“Of course I want to win the Golden Shoe title,” Ji said. “But my team’s victory is more important than my goal. I’m confident that we will win the championship.”

The team had an intensive two-hour training session on Wednesday ahead of the game that the coach and the players say is more like a final than a semifinal.

Choi said the strategy of using a combination of well-executed passing, daring attacks and a strong finish will be similar to previous games.

“Scoring is important, so my first demand to my players is shooting,” Choi said.

“I emphasize a balance between short passes and long passes. Germany is very good at that balance.”

For Korea, Thursday’s match is an opportunity to do what the men’s side couldn’t in their semifinal loss to Germany in the 2002 World Cup co-hosted by Korea and Japan.

“Every sports leader wants to win a game, and I would want to win this semifinal match even if the opponent was not Germany,” Choi said. “But I told my players, let’s avenge the loss to Germany on their own home turf.”