SHINee evolving from boys to men

SHINee evolving from boys to men 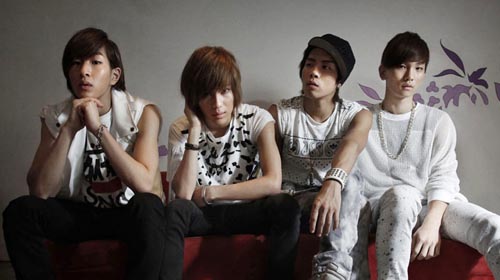 Members of SHINee, Onew, Taemin, Jonghyun and Key, from left, said their desire for a more grown-up, masculine image for the band was incorporated into the concept for their new album ‘Lucifer,’ released earlier this month. Lucifer has already reached No. 1 on local sites. By Oh Sang-min

Their debut single, “You’re So Beautiful, Nuna,” wisely targeting their key demographic at the time, soared to the top of the K-pop charts, allowing the five-member boy band to continue their success with other singles including “Ring Ding Dong” and “Love Like Oxygen” on their first album.

On their second album “Lucifer,” however, released earlier this month, it was apparent that SHINee was no longer content with being mere eye candy or being perceived as just another glossy “product” manufactured by their agency, SM Entertainment.

“The public’s perception of idols is that we are ‘made-up.’ In this regard, our company gave us a lot of room [to give more input] during the making of this second album,” said Jonghyun, one of the members of SHINee, during an interview with the JoongAng Daily on Tuesday in a building in Apgujeong-dong operated by SM Entertainment.

This time around, Jonghyun wrote the lyrics for two songs, including “Up&Down” and “Obsession.” Onew, the band leader, penned the lyrics for “Your Name” on the album as well. Jonghyun says that although he has taken numerous hours of lessons to become a lyricist, he is still sometimes critical of his lyrics.

“I wrote the lyrics to ‘Juliet’ [on the band’s 2009 EP ‘Romeo’] very late one night. When I read the lyrics in the morning, I felt a bit embarrassed,” he laughed shyly. “However, in the end, the lyrics went well with the upbeat, fun, dance tempo of the song.”

In addition to Jonghyun, the group includes Onew, Taemin, Minho and Key, although Minho wasn’t present during the interview because of a leg injury.

Those that were present at the interview said that as they were working on Lucifer, their desire for a more grown-up, masculine image for the band was incorporated into the final concept.

“We needed a change. To be frank, in the beginning, we did basically what we were told. This is the first time that band members gave this much feedback in the decision-making process - including everything from hair, costumes and songs,” said Key, another member of the band, who was wearing black Kohl eyeliner, a slinky white mesh top and acid-wash jeans.

This new approach was evident in the music as well, as SHINee distanced themselves from the sugary brand of K-pop that defined them in 2008 and embraced an electronica-inspired K-pop sound with a tinge of vintage ’80s synth that seems made for the summer club scene. On the third track, “Electric Heart,” the band takes a sexy, almost old-school Michael Jackson approach to the vocals, whispering “Get out of my way/ Don’t compare me to your other men” over a guitar chorus and a throbbing electronic beat. The band’s soft, whispering vocals feel almost sensual at times.

“Electric Heart is my favorite song from this album. It’s rhythmic in a unique way. It’s different from other songs from our albums,” said Key.

The band members said, in fact, that one of their greatest influences is the late Michael Jackson. “The man is a genre unto himself,” said Jonghyun.

Onew said that his musical preferences lean more toward older pop songs by artists such as Stevie Wonder and Elton John. Jonghyun said he likes T-Pain and R. Kelly while Key expressed more of a distant approach toward the music of today.

“These days, it seems that great male artists don’t release albums. There seems to be a shortage of icons in the pop world who can shock people with their music anymore,” said Key, who seemed reluctant to choose a favorite. “If I had to choose one artist though, it would be Lady Gaga.”

SHINee’s risk-taking on Lucifer has proven fruitful. In the first week since the album’s release (July 19-25), Lucifer rose to No. 1 on the nation’s biggest album-ranking sites, including Hot Tracks and Synnara Records. Still, the band members say they are always nervous when looking at album chart numbers.

“At our most obsessive, we look at our songs going up and down the charts every hour,” said Taemin, the group’s youngest member. “When we go up to No.1, we all die of joy!” he said, cracking up with the other members.

I was almost wholly convinced of the new, and more masculine, SHINee by the end of the interview. As I got up to leave the SM studio, however, I caught a brief glimpse of the band members, clapping their hands together and roughing up each other’s hair, and I felt rather relieved that a bit of the old SHINee still remained in these ambitious young men.