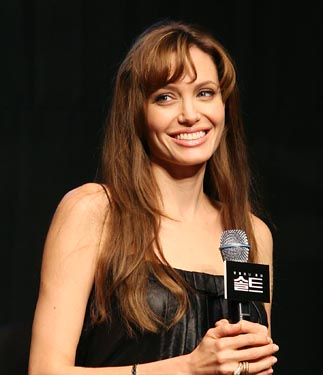 Angelina Jolie appears in Korea at a press conference to promote her new film ‘Salt,’ yesterday at the Shilla Hotel in Seoul. Provided by Younghwain

Angelina Jolie made her first visit to Korea yesterday, when she met with fans to promote the Korean release of her new movie “Salt.” The film’s distribution company in Korea had delayed the film’s opening day from July 22 to 29 to accommodate her visit.

In the film, Jolie plays Evelyn Salt, a CIA agent who is suspected of being a Russian spy. But although she has starred in hit films such as “Mr. and Mrs. Smith” and the “Tomb Raider” series, and is a proven box office draw, she almost didn’t get the role, which was originally written for a man.

When Tom Cruise, who had been cast as Edwin Salt, bowed out of the film, the role was rewritten for Jolie.

“If that role doesn’t exist, create that role,” Jolie said. She continued by saying that there should not be a line separating roles for actors based on their gender.

Beyond Jolie’s superstardom, the film has attracted additional attention here because it opens with a scene set in North Korea.

Jolie said that working with the Korean actors to shoot that scene drew her here.

As a goodwill ambassador for the Office of the United Nations High Commissioner for Refugees, she assured the Korean press that she is aware of issues related to North Korean human rights within and outside of that country.

She pointed out that the issues related to North Korea tend to focus more on the tension between two countries - not on the people.

“I’m very concerned about the people in North Korea,” she said. “I’m in solidarity with you all.”

Since the new movie required her to film some difficult action scenes, she said her family worried about her doing such strenuous work so soon after having given birth to her twins, Vivienne and Knox.

But she had no problem mastering the scenes, and said she even enjoyed it.

“Salt was a good excuse [for me] to get physical again,” Jolie said.

She said her family plays a big part in helping her decide which movies she will do and when, “But you simply do what you are drawn to,” she added.

While the twins and Jolie’s husband, Brad Pitt, did not accompany her on this trip, some of her children are here with her. The children, she said, are excited to be in Korea since they are big fans of the pop star Rain.