Couples bridge the divisions between Koreas

Couples bridge the divisions between Koreas 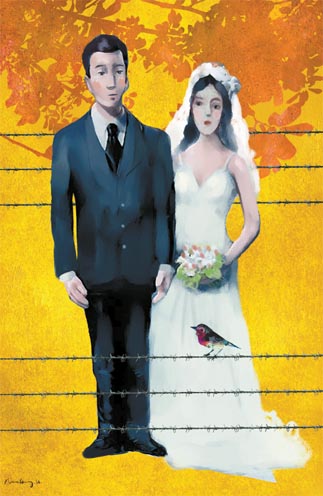 They first met at a matchmaking party in April 2008. Like the other men, Jang Seok-do, 43, handed out his business cards to a couple of ladies. One was Kim Hye-young, 37. After the party ended they got back to their lives. A few days later, Kim said she suddenly got the urge to call a few of the men who had given her their cards, but most of them sounded as if they’d already forgotten the light-hearted party where they exchanged glances over tea and cookies.

Jang was different. “He was extremely pleased to hear from me because there was no way for him to contact me without me reaching him first,” said Kim, her accent betraying her birthplace in North Hamgyong Province.

It was the beginning of a romance between a South Korean bachelor and a woman from the North who had crossed the border. The party where the two met was organized by the city of Anseong, Gyeonggi, to encourage marriages between South Korean men and North Korean female defectors.

Kim was a trainee at Hanawon, the government-run resettlement education center for North Korean escapees. She had no address or phone number of her own and was not allowed to leave the center. Jang had to come through a barbed-wire fence to see her.

“It seems improbable, but he lives right next to the center. So we could see each other’s faces through the fence,” recalled Kim.

“In fact, no one is allowed to approach [the center for security reasons], but the police knew him because he lives in Pumgok Village, which is a sister village of the center. Because of that he could come and see me.” 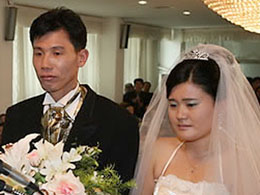 Jang Seok-do, left, is from South Korea, while Kim Hye-young, right, is from the North. They got married in March 2009. [YONHAP]

They were both a little older than the other couples, but they went through the same ups and downs in their 10-month relationship.

“We grew up in different cultures. It made me unsure about getting married to him in the first place,” Kim said.

The most difficult thing for Kim to understand was Jang’s credit cards. “In the North, we spend only if we have cash in our pockets. Jang had a couple of credit cards, and it was one thing that I couldn’t really understand.”

Kim found herself feeling sympathy for Jang as their relationship developed, though.

“I had no time to settle down as I wandered from place to place, but he grew older as he cared for his mother. He wanted to have a family of his own, but he was not an ideal spouse in the eyes of [South Korean] women here because of his sick mother.” Jang has cared for his mother for the past 12 years.

Jang’s bedridden mother reminded Kim of her mother who lived in extreme poverty in the North until she passed away.

“I was a bad daughter. Sitting up with Jang’s dying mother was a kind of compensation for me.”

Kim’s devotion to Jang’s mother helped the 43-year-old bachelor think of Kim as one woman he couldn’t let go. Kim also thought of Jang as a man on whom she could rely for the rest of her life. “If he’s good to his mother, I thought he would be good to me.”

The couple finally walked down the aisle in March last year and became one of a few so-called namnambungnyeo couples.

The term, which means “southern man, northern woman,” predates the division of the two Koreas. Traditionally it refers to the perfect couple, since northern Korea was believed to have the most beautiful women, while the southern part of the peninsula was thought to have more good-looking men.

The division of Korea into North and South brought new cultural connotations to the term. Now namnambungnyeo couples are depicted in stories of star-crossed love in dramas and films, but the concept has gained a new lease in real life with an increasing number of North Koreans - especially females - crossing the border since the late 1990s, when the North was struck by famine. 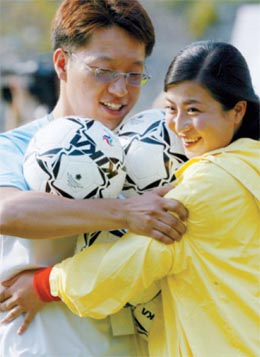 A South Korean man participates in a soccer game with a North Korean woman at an inter-Korean event held at Munhak Stadium in Incheon in June 2004. [YONHAP]

For example, 2,259 female and 668 male North Koreans settled here last year, according to Shin Sang-kyung, an official from the Unification Ministry.

“The North is a society where there is a sharp line between men and women. Most men belong to various organizations, and their movements are tracked.

“But for women, they have greater chance of mobility which makes it easier to escape,” said Shin. “Because of this, we started to see far higher number of female North Korean defectors than male defectors from 2002.”

One effect of this soaring number of female escapees is the growing number of matchmaking companies arranging dates between North Korean women and South Korean men.

“My main focus is Vietnam, Uzbekistan, China, Thailand and the Philippines, but I newly added North Korean women after receiving consistent inquires from South Korean men,” said a matchmaking company official who asked not to be identified. He promotes his company by leaving business card-sized flyers in subway cars.

Asked what makes South Korean men interested in women from the North, he said he didn’t want to talk about the issue further.

But Hong Seung-woo, who since 2006 has run a matchmaking company named Namnambungnyeo Marriage Information Company, had an answer.

Hong is one-half of a namnambungnyeo couple since marrying Kang Ok-sil, who came to the South in 2001.

His company, like several others, specializes exclusively in marriages between men from the South and women from the North. Hong said his company succeeded in matching about 300 couples so far.

“We receive phone calls from male escapees, but we only do marriages between South men and North women. If both men and women have nothing, it is just hard to live.”

Although North Korean defectors receive vocational training at the Hanawon center, most of them, especially men, find themselves doing menial jobs such as carrying bricks at construction sites. They also suffer from a high unemployment rate: 13.7 percent as of last December, far higher than the average 3.5 percent rate for all South Koreans at that time.

For this reason, marrying a South Korean man is an appealing way for women from the North to try to adapt to a new society. “I strongly recommend North Korean women get married to South Korean men, not to North Korean defectors, ethnic Koreans or Chinese. Otherwise, it is hard to live in this society,” said Kim Hye-young.

“When my wife and I launched this company years ago, our main clients were men in their mid- to late-30s, but we see men from diverse age groups come and seek advice from us these days.”

Hong remembers one 28-year-old male client. “He was deeply heartbroken after he realized his girlfriend was cheating on him. He said he was not going to see another South Korean woman after that.”

Hong receives as many as six phone calls per day from South Korean men. “Some say they are sick and tired of demanding South Korean women who keep urging them to buy pricey gifts such as luxury handbags. Some are children of people who used to live in the North before the Korean Peninsula divided. And some simply have fantasies about North Korean women,” Hong said.

The popular stereotype of a North Korean woman is pretty, pure, innocent and diligent, according to Choi Young-hee, who manages a matchmaking company named Namnambungnyeo Marriage Consulting. Choi, who came to the South from Pyongyang in 2002, was the first to open a namnambungnyeo matchmaking company in 2005. Since then, she said she has produced 416 couples. “Diverse types of matchmaking companies have been around for decades, but they are all for international marriages. I thought we [women defectors] needed one of our own.”

When asked about the divorce rates among namnambungnyeo couples, Choi said, “They all defect from the North by risking their lives. They don’t take marriage lightly as some South Koreans do.”

There are a few worrisome commercial undertones to the namnambungnyeo trend. Some sensational banners read “Let’s get married to North Korean women,” and “North Korean women never run away.” However, the Coalition for North Korean Women’s Rights, located in Sinwol-dong, Yangcheon District, western Seoul, sees some such matchmaking companies as supportive.

“Women escapees don’t need to pay for the service, and they are able to meet bachelors who are already filtered by managers from matchmaking companies. Since most women defectors want to get married and get settled here, we view it positively,” said Lee Eun-sil, an official from the coalition.

“Some worry about culture clashes between men from the South and women from the North, but we’ve seen more divorces from North Korean couples after they come to the South,” Lee said.

“Wives say they can’t put up with their husbands who tend to be patriarchal, which is said to be a common trait of North Korean men.” 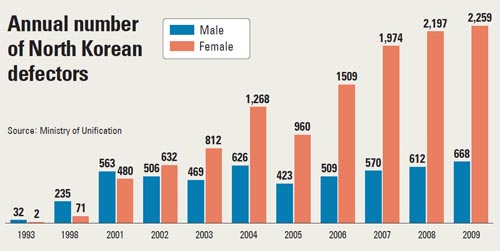 Despite mixed views about namnambungnyeo, they are likely to increase in frequency in the near future. As of last year, four out of 10 bachelors living in rural areas in South Korea married brides from other countries such as Vietnam, Mongolia, China and the Philippines, according to the Ministry of Gender Equality and Family. Some local communities such as Inje County even hand out subsidies up to 6 million won to help bachelors within the county find overseas brides. But since some international marriages end in divorce due to language barriers and cultural differences, female North Korean defectors have advantages over other foreign brides.

Although the central government does not compile data regarding namnambungnyeo marriages, experts on inter-Korean issues say these couples might be a test to gauge the future of a unified Korea.

“Family is one of the closest relationships. In that sense, these couples would show what ideology and value conflicts might arise when North and South Koreans actually live together,” said Professor Lee Woo-young from the University of North Korean Studies.

“What we know about North Korea is very superficial and theoretical, and one could call these couples experiments.”