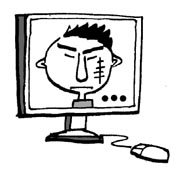 These days there are more criminals in our midst than ever. Lest we worry that criminals, once caught, will break out of jail, consider the following. There is a brilliant idea for discouraging jailbreaks: make one sleeve of prison uniforms shorter than the other. The result is that one arm turns darker than the other when exposed to the sun. This makes it easy to identify a prisoner as someone with two differently colored arms, thus preventing jailbreaks.

The idea was from Jeremy Bentham, an 18th-century English jurist and philosopher, as a way to run the Panopticon, a prison designed by Bentham that allows a few wardens to watch a large number of prisoners at once.

Because it seeks to prevent recidivism by changing a part of the prisoner’s body, tanning a prisoner’s arm is similar to facial tattooing, where the name of the crime was written on the face of the offender. In the TV drama “Chuno,” there was a scene in which fugitive slaves were tattooed with the word “nobi,” meaning “slave,” after they were caught.

On Monday, an Internet site (www.sexoffender.go.kr) that makes public the personal information of child sex offenders, such as their photos, names and addresses, started operating here. Although it does not leave a mark on the body of the offender, it is akin to a modern version of the tattoo, in that it informs society of their crimes and allows the public to keep watch on them.

Nowadays it is possible to remove a tattoo with a laser treatment, but the personal information posted on the Internet will be like a scarlet letter that follows sex offenders until their deaths. It seems more effective than both electronic anklets (because the offender can break and run away at will) and chemical castration (which is costly and cumbersome).

Of course, some say that publicizing the personal information of sex offenders constitutes a violation of their human rights. Meanwhile, the voices of the parents, who claim that defending their children from brutal sex offenders is more important, have grown louder.

But there is no need to worry that we have regressed to King Yeongjo’s day with regard to the human rights of criminals. In the Joseon era, thieves were punished with tattooing, but sex offenders - especially those who raped children under 12 - were executed unconditionally.