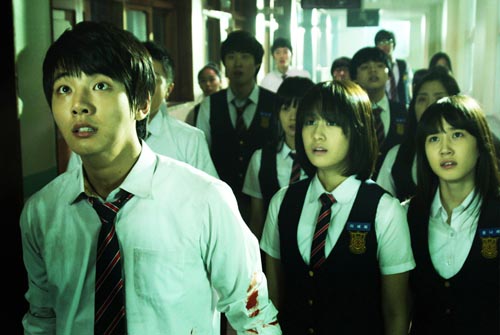 In a dark school ally, a trembling girl clings to the shirt of a figure she believes will offer her help, only to have her faint hope crushed with a cold (and bloody) response.

This is the same girl who just a day before smiled triumphantly after becoming the class valedictorian and gaining entry to her high school’s prestigious summer program.

The girl only wanted to raise her scores on Korea’s College Scholastic Aptitude Test (CSAT). Needless to say, however, the program becomes her worst nightmare.

In real life, the unlucky victim is Choi Ah-jin, a budding actress whose appearance in this film will likely boost her stardom. The film is the recently-released “Death Bell 2: Bloody Camp,” directed by Yu Seun-dong.

Unfortunately, Choi’s solid performance as the typical “mean girl” overshadows the performance of Park Ji-yeon, who plays the lead character Se-hee. Despite her charming looks and decent acting, Park appears more as eye-candy for her legion of fans than as a character who moves us to tears. Rising star Yoon Si-yoon’s celeb-worthy charisma also brightens the screen, but his spotlight moment in which his character Kwan-woo throws a lighter in slow motion disrupts the flow of the movie. In the role of the teacher Mr. Cha, veteran actor Kim Su-ro adds some much-needed weight to the film, but is killed early on. Similarly, Hwang Jung-eum, another top celebrity, is killed off in one blow. And yet, had the movie followed a single well-crafted story line, rather than attempt to show each character’s history in speedy flashbacks, it might have had more to offer than just pretty faces.

But it should have taken more chances and offered audiences more than blood. Although director Yu worked to improve the murder scenes - using devices such as a metal-spiked motorcycle, a boiler room that becomes a death trap and drugs - the film won’t do much for viewers who are die-hard slasher film fans.

According to a viewer named Chang who saw the film on opening day, the film stood “somewhere between the ‘Saw’ series and other Korean creep-fests.”

Still, the sequel is missing the psychological pressures of midterm exams that made the previous film so thrilling. In that film, the audience shares the stress and guilt of the characters, who witness a classmate die each time they fail to solve a given problem in a certain number of minutes. In this way, test-taking became a matter of life and death.

That exaggeration of the high-pressure education system in Korea distinguished the first “Death Bell” film from other school-related horror flicks. In the sequel, however, the issue of Korea’s education fever only gets a mention in the first five minutes and is then discarded. The head teacher batters kids with instructions to sleep less and study more, but shortly thereafter he disappears, taking with him the weight of reality. The students, meanwhile, are left behind to “play” the killer’s game.

If another “Death Bell” is to toll, the makers of the film series will need to be more creative. The movie does deserve some credit for its novel use of a swimming pool and frank exploration of teenagers’ sexual curiosity, but the rest of the conventional plot kills the freshness of these scenes. The beginning is like deja vu: a gruesome corpse thuds on the library floor and a disembodied voice follows: “The exam has now begun. One by one, you will die!”

To make the audience shake with metric tons of unchecked terror, new elements of surprise are needed.

The director of part three, if there is one, should take the advice of another viewer who saw the film on opening day and said she was more scared by the character who walks around the school stalking a crush than by the killer.

I can only hope the series’ creators will make us shudder if and when the school bell rings again.