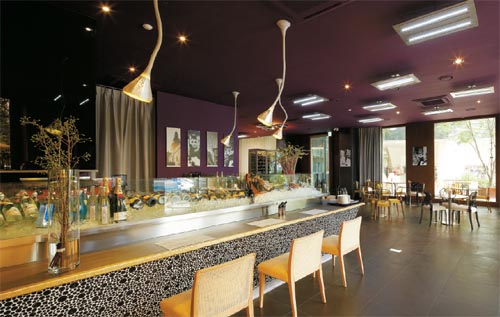 Piccolo Eo’s lounge area, above, is designed for very small groups of two or three. Provided by the restaurant

A home-cooked meal always sounds good. Yet as the sun beats down, dampening your spirits and your clothes, the last place you want to be is in front of a hot stove - not to mention the ordeal of venturing out into the muck to buy groceries.

So if you have the cash, eating out is an attractive option. And at some Seoul restaurants, you don’t even have to give up the cozy atmosphere of home.

These so-called “boutique restaurants” offer gourmet-quality food in an intimate environment, sometimes with as few as four or five seats. Boutique is a French word often used for high-end brand name shops that feature designer and custom-made goods. At these restaurants, the term is meant to evoke an establishment where the needs of the customer really do come first, for a friendly, personalized experience.

The definition of “boutique restaurant” differs depending on which restaurateur you ask. But when the JoongAng Daily spoke with the owners of three of Seoul’s most popular boutique restaurants, they all agreed on two characteristics: a boutique restaurant, they said, should first give diners a complete experience - from the ability to observe the equipment used in the kitchen to meaningful pictures hung on the wall - and second, they ought to accommodate each and every customer request whenever possible. 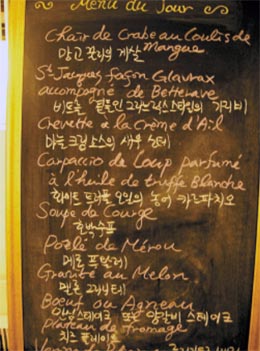 The menu is handwritten every day on a blackboard in front of A Table restaurant in downtown Seoul. Provided by the restaurant

To approximate the experience of eating a home-cooked meal, the interior and atmosphere are especially important. Everything in one’s home has a story and a reason to be there. The same should be true of a boutique restaurant, owners said. A random assortment of trendy posters or classical paintings won’t do. A more exotic flair - one owner described hypnotizing the customer into believing he or she is in a summer getaway spot - is acceptable, but a real personal touch ought to be apparent.

Although it includes a French word, the idea of a “boutique restaurant” is all Korean. “People in France would not know what it means,” said Kim Soo-mi, owner of A Table restaurant in Samcheong-dong, northern Seoul. “I think the word reflects people’s desire to dine somewhere unique and new.”

The term entered popular use among chefs and restaurant owners last year, but it was first introduced here about five years ago by the owner-chef of Ristorante Eo. Eo Yun-geuwn, who currently owns three restaurants, all named after him, first developed the idea for a restaurant that could accommodate any conceivable customer request when he was studying in Italy. Over the seven years he spent there, he was always waiting for the right time to introduce the concept to Korea, he said.

“However, dining at a boutique restaurant is like enjoying a play at a theater. The location of the theater and the stage setting of the play affect and are reflected in the audience’s final evaluation of the play itself,” said Eo. The young businessman, who wore a white chef coat, similarly explained that consistency in interior design, even down to the silverware and kitchen, was just as important in a boutique restaurant as the presentation and quality of the food.

The decor at Piccolo Eo, Eo’s latest venture, is simple but elegant. Orange lilies in vases adorn the small tables in the lounge and Audrey Hepburn posters from “Roman Holiday” that Eo picked up at a flea market in Italy hang on the walls. A separate, smaller space offered an even cozier dining environment, with white tablecloths and cushioned chairs.

But what really sets Eo and restaurants like it apart is the lengths to which chefs will go to fulfill specific requests - without reserve or resentment. Eo said that there was one customer who asked him to make a classic, old-fashioned vegetable soup to remind him of the grueling years he spent as a salesman in Europe decades earlier. Another customer brought a picture of her family and asked the chef to cook a meal that would remind the family of each its members as they ate. Compared to these very personal challenges, cooking easily digestible food for an old man who cannot chew well was one of the easiest requests Eo ever received, he said.

Another boutique restaurant in southern Seoul, Jung Sik-dang, also strives to accommodate every detail of customers’ requests. For a regular customer who recently turned vegan, chefs created a vegan menu for one to help him enjoy dining at the restaurant as much as he used to.

While the boom brings in business, Eo is concerned that many restaurants have begun throwing around the word “boutique” as a fancy-looking marketing gimmick, with no intention of going through the trouble he has gone through for his customers.

Below are a few of the genuine members of the boutique restaurant club, well worth trying as the humid days of summer draw to a slow close. Remember to make a reservation - and mention any unusual requests that will require special preparations ahead of time.

An oasis on a busy corner 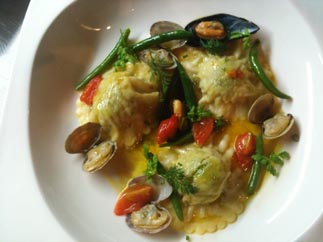 Eo’s wife and manager of another of his ventures, Ristorante Eo, Bae Soo-youn was responsible for the decor at Piccolo Eo and still selects all the flowers for the tables herself.

The mix of a down-home flavor and delightful, exotic touches makes the restaurant a good place for after-dinner drinks, an informal meeting or a classy family outing.


Quite a delicious pun 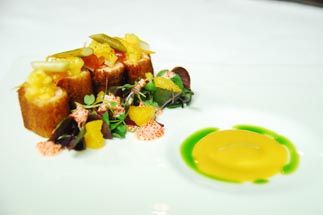 Salmon with stalk of garlic

At Jung Sik-dang, even the name is likely to elicit smiles (and maybe a few groans). It’s a pun on the name of its owner, Yim Jung-sik, and the Korean word for restaurant, sikdang.

Though the name may be a little silly, reservations are a must at Jung Sik-dang, which is famous for its Korean fusion. The ingredients include many familiar to traditional Korean palates, even if some of the dishes may not be. Seaweed soup and stir-fried anchovies are staples.

The restaurant is popular among people who are trying Korean food for the first time but are afraid of starting with authentic local tastes. If requested, the restaurant can design a menu for people with special dietary restrictions. The chef, Yim Jung-sik, has tried to give each diner as much space as possible, to help recreate the feel of a meal at home. The restaurant is open Monday to Saturday, serving dinner from 6 to 10 p.m. Lunch, which is cheaper and starts at 40,000 won, is served from noon to 3 p.m. To get to the restaurant, head to Apgujeong Station, line No. 3, exit 2. (02) 517-4654 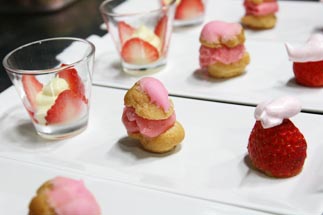 A Table, which means “on the table” in French, is already well known as a must for anyone interested in the Seoul culinary scene.

Located in the center of the city, it attracts many businessmen and women to its daily five-course lunch specials. It is almost impossible to make a reservation even one day early, so it is better to call and make a reservation a couple of days in advance.

The owner, Kim Soo-mi, says A Table falls in the boutique restaurant category because it prioritizes the total experience of food and atmosphere.