Celtic crumble in loss to Braga

Celtic crumble in loss to Braga 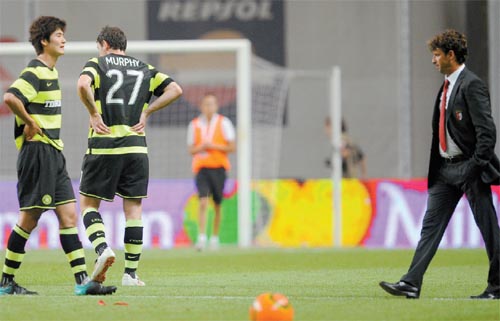 
BRAGA, Portugal - Neil Lennon endured a nightmarish European debut as Celtic boss on Wednesday, falling 3-0 to the Portuguese side Braga in the first leg of their Champions League third qualifying round match on Wednesday.

Braga went on top when Alan Silva converted a 25th-minute penalty after Korean Ki Sung-yueng blocked a cross in the box with his arm.

The team doubled its lead when Nigerian defender Uwa Elderson Echiejile headed in a corner before Brazilian substitute Nascimento Matheus scored a sensational free-kick from 35 yards in the 88th minute to leave Celtic with a mountain to climb at Parkhead in the return leg next Wednesday.

Braga won all but one game in its run to second place in the Portuguese league last season.

The Scottish side was presented with the first chance of the match early on when Georgios Samaras was fouled 30 yards out.

Ki, however, blasted the free-kick high over the bar.

Brazilian Alan was pulling the strings for Braga in midfield and threaded a ball through the middle for fellow countryman Lima.

But Zaluska was off his line early to snub out the danger.

Shaun Maloney’s cross was acrobatically cut out by Pinheiro Moises as Samaras looked to connect with it just seconds before Paolo Cesar came close to giving Braga the lead early in the match.

The Brazilian cut in from the right before unleashing a vicious low shot, which Lukasz Zaluska did well to block with Andres Madrid blazing the follow-up well over.

Braga took the lead in the 25th minute when Ki gave away a penalty when he was judged to have blocked a cross from the right with his arm.

Alan confidently sent his spot-kick high into the top right-hand corner of the net, giving Polish keeper Zaluska no chance.

The home side could have been two up almost straight from the restart when Cesar set up Leandro Salino, who shot wide from just inside the box.

Celtic looked more composed in the second half and began to dominate midfield, but it failed to created any clear-cut chances.

Braga had been forced to hand keeper Mario Felgueiras a two-week contract after releasing him in order to cover for injured duo Quim and Artur Moreas.

But he didn’t have to make a key save in the game, as Celtic failed to test him.

Good work from Andreas Madrid set up Alan, who forced Zaluska into conceding a corner that allowed Braga to double its lead in the 76th minute of the game.

Substitute Matheus sent in a corner, which was missed by several Celtic players before Elderson headed past Zaluska.

Things got worse for Celtic just before the whistle when Matheus sent a powerful, swerving free-kick over the out-stretched hand of Zaluska from 35 yards out.