Plastic surgery for the mind

Plastic surgery for the mind 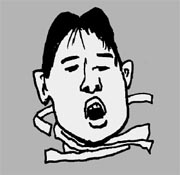 Human faces have two different functions: to allow us to distinguish one person from another and to communicate.

Being able to distinguish is essential for survival, which is why the billions of people on earth all have different faces.

Speechless communication is even more important than the spoken word in many cases, as we must be able to find out instantly if another party is hostile. In the past, we also needed to quickly determine whether another person was healthy enough to preserve the species.

This is why the human face is not covered with hair. From the eyebrows to the chin, each side of our face has 22 muscles. With complex movements of these muscles - including subtle vibrations - humans can express a number of emotions and feelings through their faces, such as joy, anger, sorrow and pleasure.

According to research carried out by MIT, the human face has about 100 different spots that can each create 100 different expressions. So an astronomical number of combinations can be created. Wrinkles are not technically facial expressions, but they can convey a lot of information.

It is difficult, therefore, to properly recognize a human face that changes endlessly. Even for someone you just met yesterday, the rate of recognition can drop to 90 percent if the person’s posture changes. It drops again to 76 percent if his or her facial expressions change. And the rate plunges to 60 percent if both the person’s posture and facial expression shift, which means it’s almost at an unrecognizable level.

In modern times, however, people attach too much significance to the human face.

The saying “beauty is only skin deep” is of no use these days. Zhuangzi said that real beauty cannot be created by carving and chiseling, but rather by restoring the innocence of people. And then there is the Hindu custom of applying a tilaka - or the “mind’s eye” - to the forehead. It derives from the idea that seeing is not believing.

The movie that contrasted the identity of the human face most dramatically is “Face/Off” directed by John Woo. It’s a story about a detective and a terrorist who essentially exchange faces via medical operations, though their minds remain the same.

There is an old saying that the human body cannot beat the human mind. Physiognomy, which even Aristotle was receptive to, is perhaps another way of expressing that concept.

It’s been reported that a Spanish farmer whose face was marred in an accident received a new one via plastic and reconstructive surgery. “Face/Off” has become a reality now, but the problem is that there are now animal-like people wearing human faces. It is difficult to discern them by their faces alone. I wonder whether there will ever be an operation that can also change their minds.