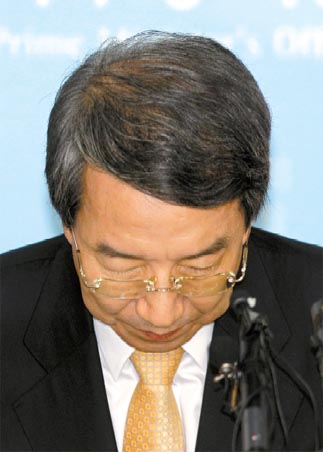 Prime Minister Chung Un-chan bows to the nation during a press conference at the Central Government Complex in Seoul yesterday. Chung said he offered to resign following the legislative defeat of a government plan to make a science and education hub in Sejong City. [AP/YONHAP]

Prime Minister Chung Un-chan told the nation yesterday that he will step down from his post, ending a turbulent 10-month term marred by a failed attempt to revise the Sejong City development plan.

“A series of major political events has concluded with the July 28 by-elections, and I believe a clean slate has been prepared for the president to start the second half of his term,” Chung said in a televised press conference that was broadcast live. “As a responsible public servant, I decided now is the opportunity to make public my intention to resign.”

The Grand National Party trounced the opposition Democratic Party in Wednesday’s by-elections, winning five out of eight districts. With the victory, the GNP now commands 172 seats in the 299-member National Assembly, while the DP occupies 87.

“I have tried to dissuade him several times because I want to work with him longer,” President Lee was quoted as saying by his senior public affairs secretary, Hong Sang-pyo.

“But Chung expressed his intention to step down out of a heartfelt affection for the people and the nation. I feel very regretful about this situation.”

With Chung’s resignation, Lee’s cabinet reshuffle will be hastened. “With this clean slate, I will have a deep consideration [about the reshuffle] during my summer vacation period,” Lee was quoted as saying by Blue House spokeswoman Kim Hee-jung. (The president’s vacation takes place during the first week of next month.) “I will deeply think about the direction of state affairs for the second half of my term and make an announcement.”

A senior Blue House official said President Lee will likely replace up to eight ministers in his cabinet and appoint a new prime minister around Aug. 10.

In his press conference, Chung candidly recalled the failures and achievements of his term.

“Ten months were too short to accomplish what I had aimed for, and Korea’s political landscape was too rough,” Chung said, expressing regret over failed education reform.

“Above all, a revised blueprint for Sejong City was created for the long-term future of the nation, but I failed to accomplish it,” Chung said.

“It is not only a matter of personal regret, but also a matter of remorse that I had failed to prevent the expected confusion and the waste of the national resources in the future [by moving government offices out of Seoul].”

Chung said his proudest achievement was settling the dispute over the Yongsan fire, which claimed six lives (including one SWAT officer) during an eviction of squatters from a redevelopment site in Seoul.

In December 2009, Chung issued a statement expressing deep regret as prime minister over the tragedy, in which five squatters were killed. The confrontation also wounded 23 people.

Chung said he will perform his duties until a successor is named to make sure there is no vacuum in the government.

Following the Grand Nationals’ defeat in the June 2 local elections, Chung told Lee he would step down. On June 29, the National Assembly officially killed the administration’s bills to revise the Sejong City blueprint from a plan to build a mini-capital to an industrial and science hub.

The next day, Chung held a press conference and said, “As the architect of the revision bills, I will take all the responsibility for the rejection.”

Chung’s effort to push forward the Sejong City revision met fierce resistance not only from the opposition but also from former ruling party chairwoman Park Geun-hye and her loyalists.

Following the local election defeats, the Grand Nationals increasingly urged President Lee and Park to reconcile and end the factional schism in the party. Chung's resignation is expected to facilitate the possibility.

The 62-year-old Princeton-educated economist had been critical of Lee's policies, but actively promoted the Sejong City blueprint revision.

Ahead of the 2007 presidential election, Chung was discussed as a possible candidate for the allied liberal parties to contest Lee’s candidacy. When President Lee named Chung prime minister last year, Park loyalists worried that Chung was being groomed as a successor to Lee.

While it remains unclear whether Chung will stay in politics, Lee will continue pushing his reform agenda focused on working-class-friendly, small-business-friendly policies, a Blue House official said.

Lee described his plans for the second half of his term in an Aug. 15 Liberation Day address.