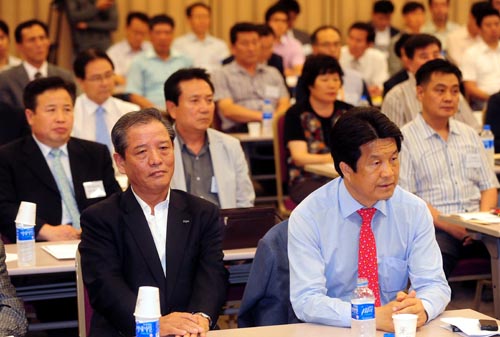 Businessmen who are operating factories in the Kaesong Industrial Complex launch a council to hold direct dialogues with North Korean government yesterday at the Banking Center in Myeong-dong, Seoul. [NEWSIS]


South Korean companies in the Kaesong Industrial Complex formed a council to hold direct dialogues with the North Korean government, according to the Ministry of Unification.

Previously, companies working in Kaesong communicated with North Korea through the South Korean government, although a law governing the operation of the complex has allowed a representative organization since its opening in 2004.

According to the ministry, the companies formed a “corporate representative council,” selected its executives and approved internal rules at an inaugurating meeting held in Myeong-dong, central Seoul, yesterday.

A total of 142 companies registered with the Kaesong Industrial District Management Committee formed the organization. Companies with active operations at Kaesong numbered 121.

Companies working in Kaesong have long had an association in Seoul, which is not entitled to talk with the North. A few years ago, the companies said they needed a direct channel for dialogue. This became especially true after dialogue between North and South Korea ended after the sinking of the warship Cheonan in March.

The organization plans to discuss issues such as wage and taxes with the Kaesong Industrial District Management Committee and its supervising organization, the General Bureau for Central Guidance to the Development of the Special Zone.

Insufficient transport infrastructure, customs issues and telecommunications problems, which have impeded the development of the complex, will also be discussed, officials of the companies said. Some expect the council could contribute to stabilizing the operations in Kaesong.

Since the Cheonan sinking, the Kaesong complex, which is located north of the DMZ, is the only active venue of inter-Korean economic exchange. South Korean companies employ around 45,000 North Korean workers.