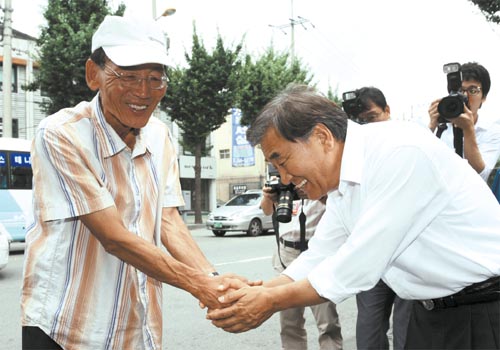 Lee Jae-oh, right, shakes hands with a resident yesterday in a street in Bulgwang-dong, Seoul, to show gratitude for support that helped him win the by-election in Eunpyeong B electoral district on Wednesday. [NEWSIS]


The political comeback of Lee Jae-oh, one-time kingmaker of the Grand National Party, is going to overhaul the dynamics of the ruling party, possibly broaden the schism with rival Park Geun-hye - and may even lead to Lee going for the throne himself by running for president in 2012.

Lee, adviser and personal confidant to President Lee Myung-bak, easily won a National Assembly seat in Wednesday’s by-election for the Eunpyeong B district from voters who, in 2008, kicked their three-term congressman into the political wilderness.

When he announced June 30 his intention to end his “exile with a dream” by running once more, presidential aides tried to persuade him to stand down, worrying that a defeat would kill his political career for good. The president himself advised Lee not to run.

Lee, however, decided to stage a political comeback entirely on his own, not even allowing GNP bigwigs to campaign for him. His victory will shake up the party, and could put him back in the kingmaker’s chair for 2012 - or make him the GNP presidential candidate.

“Since 1996, I spent 12 years to make Lee Myung-bak the president, and now my dream has come true,” Lee said tearfully on Dec. 19, 2007 when Lee Myung-bak won the presidential election. “Now, I don’t have to be criticized and insulted for saying harsh words on behalf of other people for a political purpose.”

Lee is now back in the party trenches, and will need both harshness and diplomacy to deal with schisms in the party, even among the pro-Lee Myung-bak wing.

After Lee’s victory, pro-Lee Myung-bak lawmakers hailed his return. “He will become the new pivotal figure of the pro-Lee lawmakers and bring a new dynamic to the party,” said Representative Kwon Young-jin.

Pro-Park Geun-hye lawmakers, however, worry that factional strife will deepen. The ruling party has been split into two factions - Lee Myung-bak loyalists and Park supporters -- since Lee defeated Park in the 2007 presidential primary. When the party then announced candidates for 2008 legislative elections, most of the candidacies went to Lee’s group, enraging Park supporters. Lee Jae-oh’s relationship with Park reached its ebb at the end of 2007, when Park described the president’s adviser as “the height of arrogance.” So far, the two have not reconciled.

While Park remained silent about the GNP’s by-elections victory, her spokesman, Representative Lee Jung-hyun, said, “We congratulate Lee on his return to the National Assembly. The party, however, must not be intoxicated by the victory.”

Pro-Park lawmakers largely worry about Lee Jae-oh’s role leading up to the 2012 presidential election. Park is the strongest contender for the GNP candidacy.

“He will likely make a bid to become a presidential candidate, and he can also play a role as a kingmaker once again,” said a pro-Park lawmaker. “That will put Park into a serious predicament.”

Another lawmaker said “In other words, there will be a noisy fuss in the party.”

Lee yesterday dismissed worries about deeper factional divisions in the GNP. “There should be no reason for a confrontation because of me,” Lee said. “I will not cause any strife. Both pro-Park and pro-Lee [Myung-bak] factions must do its best to restore the economy for the working class, and there will be no factional fights.”

Asked if he has a plan to meet with Park, he said, “I will probably have a natural chance to meet her. That’s always better.”

Contrary to their mixed feelings about Lee Jae-oh’s return, the pro-Park lawmakers welcomed the election of two of their lawmakers into National Assembly. Lee Sang-kwon, who won the Gyeyang B in Incheon, and Kim Ho-youn of Cheonan B in South Chungcheon are both considered to be Park loyalists.

Lee’s return may also reshape the dynamics within the group loyal to the president. The pro-Lee faction has been split into three groups; a pro-Lee Jae-oh group, a group of veteran lawmakers led by the president’s elder brother Lee Sang-deuk, and a group of young, centrist reformists.

The power struggle among the three groups deepened after Lee left politics, and led to a recent abuse of power scandal over illegal investigations by the Prime Minister’s office of politicians and civilians considered to be enemies of the president.