Man explores life on the Ganges

Man explores life on the Ganges 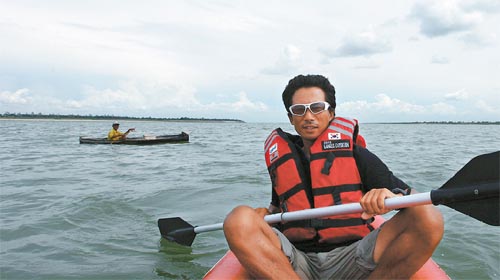 Nam Young-ho, a photographer and explorer, rows an air-filled kayak during his three-month journey along the 2,510-kilometer Ganges River this year. Provided by Nam Young-ho


Nam Young-ho, a 33-year-old photographer and explorer, has lived a life most would deem extraordinary. He crossed China’s Taklamakan Desert, one of the world’s largest sandy deserts, by himself last year. In 2006, he finished an 18,000-kilometer (11,185 miles) bicycle trip across 13 countries on the Eurasian continent.

On his last trip, he traveled the entire length of the Ganges, paddling an air-filled kayak or traveling on foot. The trip, which took three months, was arguably the first modern expedition of the river completed without the aid of a motorboat.

The famous New Zealand adventurer Sir Edmund Hillary explored the river in 1977, but he traveled by jet boat. Andy Leemann, a Swiss explorer, also used a motor boat in his recent trip down the river.

Nam said his memories of the Indian river are still so vivid, it’s like he is living in the photos he took there. 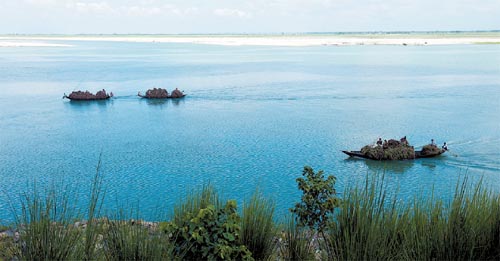 A photo of the Ganges River taken by Nam Young-ho.

“There was nothing banal about the river and its colors were so strong,” Nam said. “It was as though the river were telling me that’s what my life should be like.”

In a recent interview at his studio in Sinsa-dong, Seoul, Nam said that his trip to the Ganges was inspired by Hyecho (704-787), a monk during the Shilla Dynasty, whom Nam called the first Korean metropolitan. It was Hyecho’s book, “Memoir of the Pilgrimage to the Five Regions of India,” written after his five-year walking tour of India, that launched Nam on his recent journey.

“I wanted to experience myself what attracted Hyecho to India,” Nam said. “I wanted to follow the traces he left along the river.”

Nam and his colleague Jeong Chan-ho, 30, left a village in Gangotri, an area at the foot of the Indian Himalayas, in a 25-kilogram air-filled kayak on April 6. They arrived in the Bay of Bengal in Bangladesh on June 21. They walked approximately 200 kilometers of the 2,510-kilometer journey on foot.

For convenience and safety, they limited the amount of baggage they carried with them. Along the way, they were often provided with food such as watermelons and cucumbers from people in the villages through where they traveled. Still, Nam said he lost nine kilograms during his trip.

Nam said the expedition made him feel a like pilgrim, which led him to think about life and death. He said he saw more than 30 dead bodies on the river every day during his journey.

Considered the most sacred of all rivers by Hindus, the Ganges is used as place of worship and as a burial ground. He said he once saw a woman washing her clothes in the river, undisturbed by a corpse floating nearby.

“The boundary between life and death was so blurry there,” Nam recalled.

He himself experienced several life-threatening moments.

In a region called Dawalpara in June, a four-member gang, whose faces were covered with white masks, robbed Nam and Jeong. They threatened them with a 50-centimeter knife and pistol and took their cash, passports and some camera equipment.

As they were traveling down the river near Baranashi, a Hindu holy ground, they found themselves in the middle of a cyclone. Three hours later, they managed to get their boat to shore and a kind farmer provided them with shelter for the night.

“There were many moments where I felt ‘this is it, this is my final moment,’” he said. “It made me think about the value of life in a whole different way.”

He said he is now taking a different approach to living.

“Once you decide to live, you have to live with as little regret as possible,” he said.

After returning home, he said he started writing letters to acquaintances that he had not been in contact with for a long time.

Nam took 6,000 to 7,000 photos during the journey and plans to hold an exhibition with some of them at the end of the year.

“What I felt and experienced on this trip will help me on my next one,” he said.

Nam is already planning for his next adventure, where he will follow the path of the “Goryeoin,” Korean people living in Russia or central Asia. Most of these people are the offspring of independence movement activists during the Japanese occupation of Korea and they are living with little recognition from the government, Nam said.

“There are many untold epic stories in our history that are valuable but are fading into oblivion because no one pays attention to them,” he said. “I want to shed light on them and create some momentum for talking about them.”