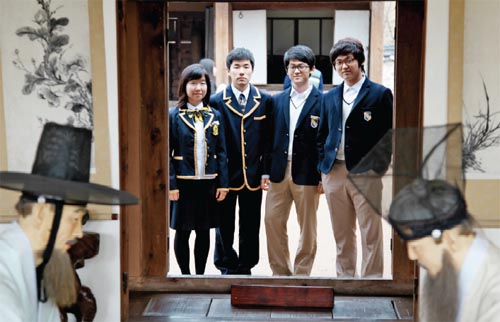 The four translators of “Letters from Exile: Dasan’s Letters to His Sons” pose at the cottage in Namyangji, Gyeonggi, where the Korean philosopher was born. By Chung Yoon-young


Students of world history are familiar with the likes of Kant, Marx and Gandhi, but it’s likely that not many of them know about Korean philosopher Jeong Yak-yong, whose pen name is Dasan.

Four high school students recently set out to change that by translating some of the philosopher’s works from Korean into English.

Their finished work, “Letters from Exile: Dasan’s Letters to His Sons,” is based on the book, “Letters from Exile,” which is a compilation of letters written by the Joseon-era philosopher that were translated from the Chinese by Park Seok-moo, the chairman of the Dasan Research Center. The students’ book was published last month.

The four students have a unique relationship. Chung Yoon-young and Chung Young-seog are sister and brother, and both attend Hankuk Academy of Foreign Studies. Lee Seung-hun and Lee Min-hyung are twins who attend Daewon Foreign Language High School. The two Lee brothers and Young-seog have been best friends since middle school. Yoon-young is a senior and the other three are juniors.

All four students have lived abroad. The Chungs lived in Davis, California, for six years and the Lees lived in Mission, Canada, for two years. During their time away from Korea, they said they were disappointed to discover that Korea was such a small part of their history classes.

“During my AP history class, I was surprised by the fact that while China and Japan were introduced in detail over a whole chapter, Korea shared just one page with Vietnam,” said Min-hyung. “I think our country has been too caught up with developing the economy and not on sharing our great culture and works.”

They also said they were surprised at what some of the Koreans they met knew - and didn’t know - about Korea.

It was Yoon-young who discovered the letters, and when she did, she knew she wanted to share the information with others.

“When we lived in the states, we met some Koreans who had no ‘Korean’ in them,” said Yoon-young, who was an intern at the this newspaper in 2008. “Jewish people have the Talmud, and when I saw the contents of Dasan’s Letters from Exile upon coming back to Korea, I felt that this could be Korea’s Talmud.”

After she made the decision to translate the letters, she enlisted the help of her brother and his friends.

“We were each in charge of a letter and we each worked on the translations for about five hours per week,” said Young-seog. “We worked on the book for about four months and we would meet every weekend to check in with one another.”

Jeong Yak-yong was a philosopher who lived during the Joseon Dynasty (1392-1910) and is regarded as one of the most influential people in Korean history in silhak, or practical learning, and he emphasized the importance of traditional Confucianism. He was open to Western ideas and practical science and was one of the first Korean converts to Roman Catholicism.

Although King Jeongjo, Jeong’s long-time supporter, tolerated Jeong’s conversion to Catholicism, his son, Sunjo, did not. After Sunjo ascended the throne, he sent Jeong into exile for 18 years. During that time, Jeong wrote a series of letters to his sons and brother, and also to his students.

The book contains some of the letters Jeong wrote to his sons.

“After the Jeong family was disgraced, I think it was still important for the sons to have a father figure,” said Min-hyung. “Through the letters, Jeong was able to deliver his messages of morality and living wisely.”

When asked what the hardest part of writing the book was, all four agreed that it was translating outdated expressions and cultural concepts.

“Translating ideas and customs from more than 200 years ago and making it understandable for the people of today was the hardest part,” said Seung-hun. “Since some words and social customs are difficult to understand by today’s standards, we had to add explanations so that readers would understand the context better.”

The four students said that Korean philosophers such as Jeong are still unknown in the West in part because there are so few translations of their work. They feel that Jeong could be considered the Aristotle of Asia, as his teachings are still relevant today.

The translators will soon go their separate ways, but the one thing they have in common is their desire to have an impact on the world. And they all seem to have been inspired by the words of one of Seung-hun’s teachers, who said: “If you want to make a change, that can be the motive for everything.”