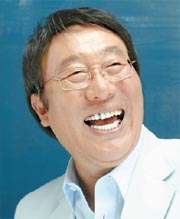 Baek Nam-bong, a legendary comedian who was loved for his art of impersonation, died in a Seoul hospital on Thursday, his family said. He was 71.

Baek, whose real name is Park Du-shik, was diagnosed with lung cancer in 2008 and had been receiving treatment at a rehabilitation center near Seoul. His condition had deteriorated recently, and Baek was admitted earlier this month to an intensive care unit at Samsung Medical Center in southern Seoul.

Born in 1939, Baek debuted in 1969 on the TBC radio program “Talent Show” and came into the limelight as an impressionist with hundreds of different voices.

Dubbed the “master of the one-man show,” Baek performed in all different dialects across the Korean Peninsula and impersonated just about everything that made a noise, from drunkards, chickens, and trains to boat whistles and guns.

When most comedians performed in a duo or a larger group in the 1970s and ’80s, Baek elicited laughs through his solo stand-up improvisations, which became a trend years later.

“He performed solo stand-up comedy for 30 years. It’s an amazing talent to be able to pull off a solo stunt for 20 to 30 minutes, which is difficult even for young comedians today,” Lee Bong-won, a comedian who has long known Baek, said.

Baek received the Presidential Award in 2000 for his mastery of performance. Most recently, he co-hosted the “Baek Nam Bong Show” with his daughter, Park Yun-hee, a former figure skater, on the cable channel Silver TV.

He used to be a chain-smoker before quitting in 1988.