Of dung beetles and butterflies

Of dung beetles and butterflies 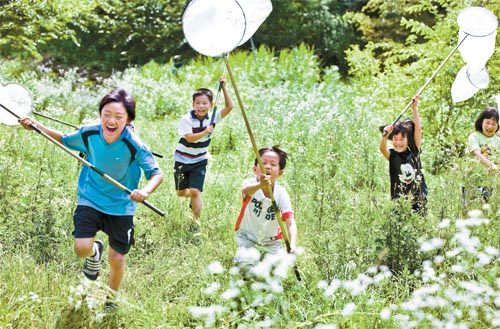 HOENGSEONG, Gangwon - It’s summer vacation season, and one traditional activity for Korean children during the summer months is collecting insects. But for city kids these days, who live far from the brush and countryside of rural Korea and can’t tell one bug from another, it seems like an impossible task.

That’s where the Holoce Ecosystem Academy in Hoengseong County, Gangwon comes in. Not only an educational institution but also a research laboratory, Holoce breeds over 600 insect species in its labs, and there are an additional 400 varieties of insects in the wild nearby. I joined one outdoor class alongside eight children from the Geumseong branch of Gapchon Elementary School.

“Insect collecting is the process of understanding creatures that inhabit this planet with us,” said the headmaster of the academy, Lee Gang-wun, 52. “It is not just showing off techniques for capturing insects, but finding out their characteristics and modes of life through firsthand observation.

“Thus, the class here prioritizes lectures that help us understand these animals better before we go out searching for them in the field,” Lee continued. “Through sample studies, we become familiar with the shape and structure of the insects, pick up on their ecology, and finally go out to catch and classify them.”

Lee brought out a butterfly specimen. “You know that there is a bone structure to a butterfly’s wing?” he said. “When you fix a pin under the frame and spread out the wing, it looks like this.” The flattened-out wing revealed splendid patterns.

As Lee repeatedly emphasized throughout the class, “All these samples are retrieved from already dead butterflies. We should never make samples out of living ones.” 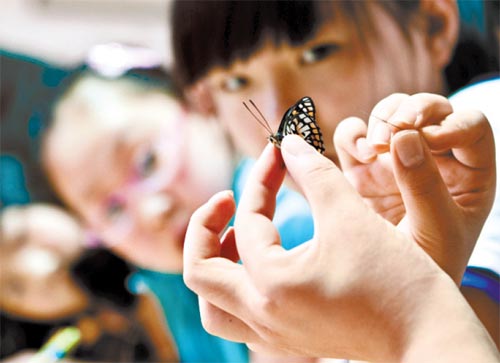 Children at the academy listen to explanations about how to tell a female butterfly from a male. by Kwon Hyuk-jae

Following the studies of the specimens, Lee led the children to the insect breeding facility for a species called Copris tripartitus Waterhouse. A species of dung beetle, it has been designated by the Ministry of Environment as being in danger of extinction.

The academy helps such endangered species reproduce. In 2005, the ministry recognized the Holoce facility as a conservatory for endangered insects. Lee uses sterilized excretions from his own cows to feed the Copris tripartitus Waterhouse.

“That brown round ball is rolled-up cow dung, at once home and food for the Copris tripartius Waterhouse. It doesn’t stink,” explained Lee, putting the insects on each child’s open palm. The children sniffed around the small creatures and petted them in awe.

“Copris tripartius Waterhouse dwells in a hole that it digs with the front claws,” said Lee to Kim Yoon-suk, a seven-year-old student, when he dropped a dung beetle, surprised by its unexpected strength. The tearful boy mumbled apologies to the beetle.

Other children giggled when the insects tickled their palms in an attempt to dig.

“I had only heard of these dung beetles before today. I feel I’ve gotten much closer to them now that I have seen them and touched them,” said Lee Jae-hee, a 10-year-old student. 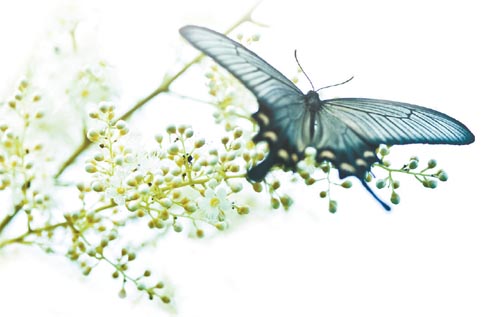 The children were finally ready for field work. Each child ran off with a butterfly net at full speed. One snuck up behind an unsuspecting butterfly resting on a flower and caught it with a flourish.

Lee instructed the child, “Gently press the belly of the butterfly.” Part of the abdomen separated slightly. “This is a male butterfly, because a female’s abdomen doesn’t split at the end,” he explained. “You can take the male butterflies you catch away with you at the end of the day, but be sure to let go of the females since they have to reproduce.”

For every insect that the children brought to him, he told them its name and characteristics. “Insect collecting is essentially exchanging greetings with other creatures we live with,” he said, hoping “the children will realize the energy and diversity of the insects in our daily lives.” The purpose of collecting insects, he added, is to encourage kids to learn more about them through museums and books.

Holoce Ecosystem Academy also features around 830 different species of flowers and trees planted around the facility, recalling a large botanical garden. The diversity of green life provides food for different insects with different needs. The word “Holoce” comes from the name of the geological period the Holocene, which stretches from 1.7 million years ago to the present day.