A STRATEGY BEGINS TO FORM
Survival in the ‘bowling alley’

Last week, General Paik described the sacrifices of the labor recruits who gave their lives taking Mount Yuhak outside Daegu. 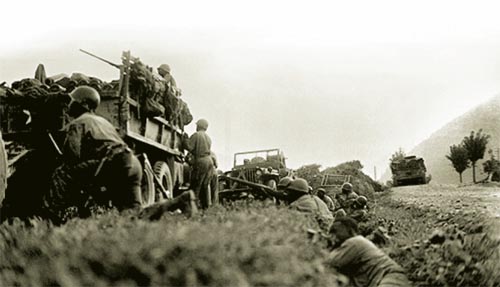 American troops under attack take cover behind vehicles and in trenches. Information about the location and time of the photograph has been lost. Provided by the US National Archives and Records Administration


With the allied forces cornered on the southeastern edge of the Korean Peninsula, Kim Il Sung and his commanders attempted to push through and win the war by moving 40 of their Soviet T-34 tanks to Dabudong front lines. The enemy also gathered all possible troops and sent them in as reinforcements to the Nakdong line.

If Kim’s gamble had paid off and the North Koreans had been able to break through the allied forces’ defensive line, North Korea would have won the war. On the other hand, Kim also faced the possibility of being pushed back if the tactic backfired and his all-out gamble failed.

Kim and his commanders faced a daunting task. The ROK forces continued to fight fiercely in the surrounding hills, and the Americans were building a formidable defensive perimeter along the Ganseon Road.

The Battle of the Bowling Alley took place in the narrow Chunpyeongdong Valley north of Dabudong. Over the narrow strip of road between the two mountains, exchanges of fire reverberated through the valley. Machine guns and tanks roared more loudly than they would have elsewhere.

As I mentioned earlier in the series, the area was being defended by Col. John H. Michaelis and his U.S. Infantry 27th Regiment. One of the fiercest battles in the alley took place on August 26, 1950. In an interview with a correspondent the following day, one of Colonel Michaelis’ men said the echoes of the artillery shells were so loud that the Chungpyeongdong Valley sounded like a bowling alley. The name stuck, and the valley came to be referred to by the Americans as the Bowling Alley.

I visited the site often. The enemy attempted to advance with their tanks at the forefront, and the allied forces responded with tanks of our own. It was quite a sight, and the sounds of the tank shells and machine gun fire was unbearable at times. It was especially bad during the battles that took place after sunset. The artillery fire left streaks of light in the dark, and the loud noise of the explosions that followed seemed to exacerbate the intensity of the exchange of fire. Mixed with machine gun fire, the overall sound could best be compared to the sound of beans being roasted in a huge tin pot.

The intense battles were not limited to any one particular night. After Colonel Michaelis’ arrival with reinforcement troops, such battles happened more frequently. Despite their efforts, the enemy had a difficult time penetrating our defensive line at high altitude in the surrounding hills, and they did not stand a chance against the American defensive line backed by artillery and tank support. They made numerous attempts but failed time and again to overcome the American defensive line.

Although the enemy troops came up short, they were relentless in the pursuit of their goal. They were focused on attacking Colonel Michaelis’ U.S. Infantry 27th Regiment and thought that their best chance for success was to defeat the regiment head on and advance farther south.

However, the Americans and their firepower proved to be too much for the enemy troops. The Chunpyeongdong Valley - or Bowling Alley - was protected by the 27th, and the ROK 1st Division’s troops were providing support in the hills to both sides of the valley. The area leading up to the Bowling Alley was littered with land mines, and two battalions were stationed, ready for battle on either side of the Ganseon Road. A last line of defense consisting of the U.S. Infantry 23rd Regiment supported Colonel Michaelis.

While we felt the ROK-U.S. troops had the area secured, we got a serious scare on Aug. 21, 1950. It must have been around 10 a.m. when I first got a call briefing me on the ROK 1st Division’s 11 Regiment 1st Battalion’s retreat. It was from the area under 1st Battalion’s commanding officer Maj. Kim Jae-myung. At first, I did not realize the severity of the situation and merely thought it was one of those commonplace happenings in the heat of battle. I continued to receive briefings and did not have a clear idea of what was happening up to that point.

It was at that moment when a call came from the U.S. 8th Army’s Headquarters.

When I took the handset receiver from one of the officers under my command, I was startled to hear someone shout: “Commander, what are you doing? How can the ROK Army do this to us?”

Still lacking details on the goings on in the Bowling Alley, I was startled and left speechless.

An American officer of the U.S. Infantry 3rd Infantry Division throws a hand grenade toward Chinese People’s Liberation Army troops near Uijeongbu on March 23, 1951. Provided by the U.S. National Archives and Records Administration


I asked the person to explain the situation in detail. The person - who I could only guess was an officer of the U.S. 8th Army - began to provide a more detailed description of what was happening in the valley.

According to the American officer, the battalions to both sides of the valley, which were supposed to provide support for the U.S. 27th Regiment, had retreated without putting up much of a fight. This left huge holes in the defensive positioning of the U.S. 27th. The officer gave me an ultimatum: Get my men back in place or the U.S. infantry would have to leave the valley unprotected.

Colonel Michaelis, who had watched a throng of ROK troops retreating hastily from the valley had notified the U.S. Infantry 8th Army Headquarters. Facing a dangerous situation in which his men could be isolated in the valley, Colonel Michaelis had threatened to retreat.

The colonel reiterated the message to me in a phone call, relaying the desperate situation he and his men were facing.

My mind was racing. The efforts to protect Dabudong had cost both the ROK and U.S. armies countless lives during the entire month of August under unbearable heat and unfavorable conditions. As Colonel Michaelis had described it, if the allied forces lost the Bowling Alley, it would lead to an unimaginable situation for us. If enemy troops gained control of the hills surrounding the Bowling Alley and attacked from both sides, the U.S. Infantry 27th Regiment would have to flee, which left the possibility of losing all the American firepower to the enemy troops. If that were to happen, the U.S. Infantry 23rd Regiment would be the last line of defense protecting Daegu and Busan from the enemy. We were all facing a desperate situation.

First, I told Colonel Michaelis to hold his troops in the valley for the moment and that I would come up with a solution.

I ran outside and got in the passenger seat of a jeep. We raced towards Dabudong and were nearing the mouth when I saw my driver yelp in pain and grab his left shoulder. The jeep came to a halt.

“Commander, I think I’ve been hit,” said the driver.

The driver had been hit with shrapnel from an artillery shell. He was bleeding profusely. It was not possible for the driver to continue, and I did not know how to drive.

With an increasing number of high-ranking military officers getting into automobile accidents, the ROK Army Headquarters had forbidden all commanding officers from driving and given strict orders to those without driver’s licenses.

As I got out of the jeep, I told the driver to find himself a medic and I began to sprint up the trails of the hill. Fearing our entire war effort would collapse, I ran until my lungs began to burn and the life in my legs seemed to drain out of me. A series of events from the immediate days after the outbreak of the war up to the battles at Dabudong played out in my mind in slow motion. Desperate for any kind of help, I prayed to God as I scurried up the hill, promising I would be more faithful to the religion my mother was so devoted to.

I think I was midway up the mountain when I began to sight men of the ROK 1st Battalion. I soon came across Major Kim. I barked at the men to take a knee.

“We are out of food and exhausted,” explained Major Kim before I could say anything. “We didn’t even have water, and we just could not find the energy to maintain our position.”

I told the men of the ROK 1st Battalion, “You men have put up a valiant fight up this point. But we don’t have any room to retreat at this point. If we get pushed back from this point, we have to nowhere to go.

“If we retreat, the American troops down there will also retreat,” I said. “That would spell the end of the ROK. I will take the lead. If I get overcome with fear and start to retreat, you all have my permission to shoot me on the spot. Have faith in me. Now let’s go fight.”

I saw the enemy troops in the distance near the peak of the mountain spot us and start to make their way down towards us. I pulled my pistol from my holster and began to charge up the hill at full speed. I heard the men of the ROK 1st Battalion yelling and following my lead. We must have continued approximately 300 meters up the trail when I felt a hand grab my shoulder from behind. Another man grabbed my waist.

“Commander, it’s time for you to take a step back,” said the men of ROK 1st Battalion. “We will take the lead from this point on.”