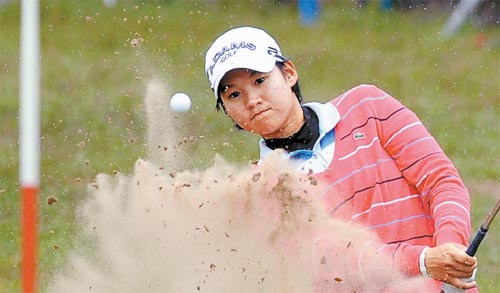 Yani Tseng of Taiwan plays from a bunker on the 18th green before finishing with a score of -8 during the second round of the Ricoh Women’s British Open in Southport, northwest England on July 30. [AFP/YONHAP]


SOUTHPORT, England - Taiwan’s Yani Tseng eagled the 18th hole on Saturday for a third consecutive 68 to take a commanding four-shot lead into the final day of the women’s British Open at Royal Birkdale.

The 21-year-old was tied for the lead after the first round and was four ahead at the halfway point. She has had just one bogey in 54 holes, a daunting statistic to her rivals.

Tseng finished at 12-under par, with Australia’s Katherine Hull in second at eight-under after scoring a 66 and Korea’s Kim In-kyung, who eagled the last hole for a 66, sits in third at six-under.

In a third round that was a mix of sunshine, wind and the occasional rain shower, Tseng never wavered, though she did admit to some nerves.

“But then I just sang to myself,” she revealed. “It was an old-school song.”

Having made a string of easy pars, she finally holed putts for birdies at the 13th and 15th before ending in grand fashion by hitting an eight iron second to 20 feet at the 472-yard 18th and holing out for an eagle three. Tseng has won two majors: the 2008 LPGA Championship and this year’s Kraft Nabisco Championship. She also won the Australian Open in February. “All week, I have stayed patient and trusted myself,” she explained.

“Today I really enjoyed myself. But tomorrow [Sunday] will be tough. There are a lot of par fives at the end and someone could eagle the last two holes, so you never know what could happen.”

Hull underlined how the closing stretch can change a leader board, as she surged into contention by making birdies in the final five holes.

She has yet to feature in the majors, but the 28-year-old is confident she can make her mark on Sunday.

“I’ve worked on shaping shots over the last couple of years and that’s what you need to do around here,” she said. “It’s always nice to finish with a string of birdies.”

Brittany Lincicome was the leading American after finishing with back-to-back birdies at 71, while Morgan Pressel, who started the championship at 77, shot a tournament-best 65 to move into the top 10. She covered the final six holes in six-under par, a run that included an eagle at the 17th.

France’s Anne-Lise Caudal, tied for second at the halfway mark, shot a 75 for one-over par and allowed Karine Icher to take over as the leading French player.

She eagled the last for a 70 and moved into the top 15 on one under par. World No. 1 Shin Ji-yai was on the fringe of contention on two-under par with a 72. But the winner at Sunningdale two years ago would have been a real threat if she hadn’t run up a quadruple bogey eight at the 11th hole.

The little Korean topped a shot and hit into a bush. But she did well to hit back with four birdies in the final seven holes.