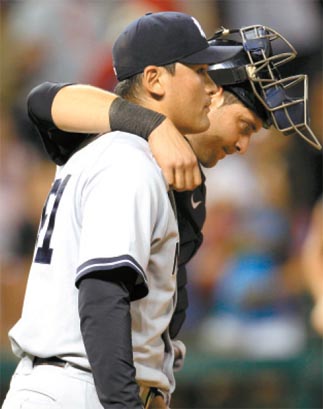 New York Yankees catcher Francisco Cervelli, rear, puts an arm around pitcher Park Chan-ho after the Yankees beat the Cleveland Indians 11-4 in a baseball game on July 29 in Cleveland. [AP/YONHAP]

One deal brings the Yankees a new designated hitter and $4 million from the Astros in exchange for relief pitcher Mark Melancon and minor leaguer Jim Paredes. The other gives the reigning World Series champions a 33-year-old right-handed reliever who joins Joba Chamberlain as a set-up man for superstar closing relief pitcher Mariano Rivera in exchange for money or a player to be named later.

Park was designated for assignment to the minor leagues by the Yankees to make room for Wood, likely ending his tenure with the club.

Berkman, 34, is batting .245 with 13 home runs and 49 RBI with 70 strikeouts and 60 walks. He fills a hole that has nagged the Yankees since Nick Johnson went out with a wrist injury.

“If there are teams that still want me to play for them, that makes me feel pretty good,” Berkman said. “I still have confidence that I can play at a high level.”

Berkman, who had to waive a no-trade clause to finalize the deal, has $7.15 million remaining to be paid on a $14.5 million contract, but the Astros payment means the Yankees will only pay $3.15 million of that total. The deal came a day after the Yankees added outfielder Austin Kearns from Cleveland, where he was hitting .272 with eight homers and 42 RBI.

“They are both great guys,” Yankees first baseman Mark Teixeira said. “It’s going to be good for the clubhouse.”

Other playoff contenders raced against a deadline to make deals without having to waive a player, meaning they would be available to be claimed by any club. St. Louis, which is leading the National League Central division, obtained right-handed pitcher Jake Westbrook from struggling Cleveland and sent outfielder Ryan Ludwick to San Diego, the NL West division leaders.

Westbrook, 32, was 6-7 with a 4.65 ERA for the Indians while Ludwick, 32, batted .281 with 11 homers and 43 RBI. The Los Angeles Dodgers, trailing San Diego by seven games at third in the NL West, obtained southpaw pitcher Ted Lilly from the Chicago Cubs along with Ryan Theriot and $2.5 million in exchange for infielder Blake DeWitt and minor-leaguers Kyle Smit and Brett Wallach.

“We’ve been looking to improve our rotation and with Ted we feel like we’ve got a very good group of starting pitchers,” said Dodgers general manager Ned Colletti.