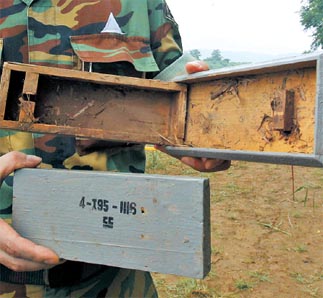 One of the North Korean wooden box land mines that may have been washed into South Korea by heavy flooding in the North. [YONHAP]

A North Korean land mine exploded in an inter-Korean border area in Gyeonggi, near the Imjin River, on Saturday night, killing one South Korean civilian and injuring another, according to the military yesterday.

The accident happened hours after 11 wooden box-type land mines were found on an island in Ganghwa, Incheon. It is the first time a North Korean box mine was discovered in South Korea.

The military said there was a low chance that the North intentionally sent the mines south, and it assumes they floated from the North after recent floods.

Kaesong, a North Korean city bordering Gyeonggi, had 443 millimeters (17 inches) of rain between July 17 and July 23, according to South Korean weather data.

An investigation by the military showed that the fatal accident happened in Yeoncheon, Gyeonggi, within a restricted area at 11:20 p.m.

Two local residents, a 48-year-old man named Han and his 25-year-old nephew Kim, were returning home from fishing near the Imjin River when they picked up two wooden boxes from a field of reeds at the river. The box Han was carrying exploded, killing him immediately, while Kim, who was five or six meters (16-20 feet) behind, suffered injuries to the face and the arms. Kim was transferred to the hospital and is in stable condition.

Earlier in the day, a resident of Jumun Island in Ganghwa, Incheon, found a similar mine and reported it to the military.

The military and police searched the area and found 16 other wooden boxes on the coast of nearby islands. Eight contained mines. After the fatal accident near the Imjin, the military discovered 19 other box mines in the area. Another one was found in the lower reaches of the Han River.

“The land mines discovered at the Imjin River didn’t have safety pins, so they appear to have been buried and deployed,” said the Joint Chiefs of Staff in a statement. “But the mines found on the island near Ganghwa had safety pins, so it is presumed they came from some kind of storage facility.”

The box mines were 20-centimeters wide, 9-centimeters long and 4-centimeters tall. They are designed to explode when the box’s cover is opened or a certain amount of pressure is put on it.

The military said it is widening its search along rivers and streams linked to North Korea, including the Han River.