Rice they can’t even give away

Rice they can’t even give away 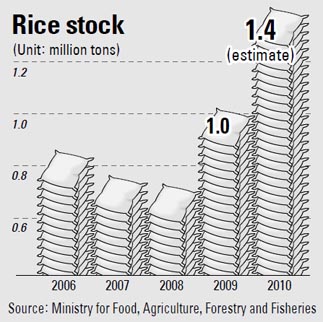 The agricultural trade and distribution team in Yeoju, Gyeonggi, is anything but a sleepy government office. Every day, the staff makes at least 100 phone calls to relatives and friends in Seoul or Busan asking if they’d be interested in some rice from their region. Last week, they peddled rice door to door to over 30 local restaurants and 80 bed-and-breakfasts. In the last month, the distribution team sold approximately 800 20-kilogram (44 pounds) sacks of rice. Director Yoo Gwang-gook said, “Yeoju public officials are trying to sell rice at every chance they’ve got.”

In North Chungcheong, the National Agricultural Cooperative Federation (Nonghyup) is starting to sell local rice through TV home shopping. The local government launched a campaign to encourage schools to serve rice for breakfast and wants to establish stores that sell rice directly to consumers.

Local governments across Korea are desperate to find ways to unload tons of excess rice. The Ministry of Agriculture and Forestry predicts this year’s rice surplus will be 1.4 million tons, 100 tons more than last year. That’s twice the optimum inventory level, which is 720,000 tons, or two months’ supply. Korea’s rice glut has several causes. Changes in eating habits have lowered rice consumption from 80.7 kg per person in 2005 to 72.4 kg per person now, according to the Ministry of Agriculture and Forestry. The quota on rice imports has been increased from 30 tons to 32 tons, resulting in an influx of cheap rice, especially from China. Since 2000, South Korea used to donate as much as 400,000 tons of rice per year to North Korea, but the Lee Myung-bak administration stopped that.

“Since rice over two years old cannot be served at the dining table,” said Park Chang-yong, communications director of the Gyeonggi Nonghyup, “we have to get rid of last year’s surplus - even if it means selling at a low price - before the newly harvested rice comes out.”

The Ministry for Food, Agriculture, Forest and Fisheries announced two weeks ago that rice over five years old will be used for animal feed.

The prime objective now is to find ways to sell or otherwise use the rice. Across the country, Nonghyup is encouraging local restaurants to serve rice from their areas. In Yeoju, department stores are using rice as giveaways to customers, and businesses are encouraged to send rice instead of wreaths for ceremonies. Nonghyup has sent letters to Yeoju-born VIPs living outside the region requesting them to eat Yeoju rice. Before the end of the year, Nonghyup is planning to sell 1,582 tons to employees in district offices, 600 tons to 500 restaurants that agreed to use Yeoju rice, and 129 tons through newly launched rice vending machines.

Icheon has been endorsing rice as gifts for family and teachers and promoting the idea of making rice cakes for birthdays. Last May, Gimpo launched a campaign called “Gimpo’s Golden Rice,” in which customers receive two 50-liter trash bags, which normally cost 2,400 won ($2), if they purchase a 40 kilogram sack of rice. Lim Lae-jun, who monitors the food supply in Gangwon, said, “While rice consumption of Gangwon residents is relatively high, our rice sales have been low because rice from Jeolla and Chungcheong is so cheap.”

The city of Ulsan, Ulsan Nonghyup and the Korean Advanced Farmers Federation began a rice promotion targeting workers at Hyundai and other companies in the Ulsan region.

Nonghyup, which has played a key role in Korea’s agricultural sector since 1961 with over 4,000 branches, acts as a bridge between farmers and consumers. It sells rice to retail stores, supermarkets and grocery stores and takes a portion of the farmers’ profit.

But in Gyeonggi, Nonghyup is demanding that farmers start selling directly the rice they grow. Of the 2,251 tons of rice that Anseong Nonghyup purchased from farmers from last April to March, Anseong Nonghyup returned to farmers 590 tons that it couldn’t sell. The amount returned was calculated according to the amount of rice the farmer sold to Nonghyup.

Chang, a farmer in Icheon, said she received 200 sacks and has been able to sell only three. “There is no way to sell these, so I’ve just given up,” she sighed. “Nonghyup notified me that if I am unable to sell as many as they told me to last year, they will not sign the contract to purchase a portion of my harvest from next year.”

“We’ve distributed the rice to the farmers to let them experience for themselves the difficulty of selling rice,” said the deputy head of Icheon Nonghyup, Jeon Sang-jin. “There was no coercion involved. [The rice] was distributed to those who volunteered.”