The other G-20 ambassadors

The other G-20 ambassadors 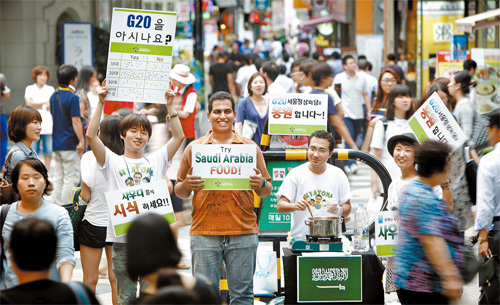 The team representing Saudi Arabia conducts a survey to determine the level of public awareness about the G-20 Summit while also serving a traditional Saudi rice dish on a street in Myeong-dong on July 27. By Oh Sang-min

Two of Korea’s most distinguished sports superstars, figure skater Kim Yu-na and soccer player Park Ji-sung, were in the spotlight again last week when the Korean government appointed them to serve as ambassadors for the G-20 Summit in Seoul in November.

But while these high-profile stars are sure to draw attention to the biggest diplomatic event in Korea’s history, little is known about the other ambassadors for the upcoming event - a group of college students called the Young Ambassadors.

Appointed by the Culture Ministry to raise awareness and promote the summit and its participating countries, the Young Ambassadors consist of 20 teams, each made up of three Korean and three foreign university students.

The groups have been fanning out all over the city to get the word out.

A huge crowd gathered around the girls, and foreign tourists were eager to take photos with them. It was their fourth successful outing on behalf of the summit.

“The G-20 Summit sounds dull and boring to most people, so we decided to promote it in a more interesting way,” said Suh Sang-hee, a junior at Chung-Ang University. “There are many tourists from all around the world in Myeong-dong, so this is a great place to promote the summit to both Koreans and foreigners.”

The 20 student groups have an incentive - they are competing against one another in several categories to win cash awards of between 2 million won and 5 million won ($1,704 to $4,260) from the ministry. The groups can launch publicity campaigns, run their own blogs, conduct research about public awareness of the summit, visit the embassies of the participating countries and create their own content showing their activities.

One of their most important tasks is encouraging citizens to follow four rules of etiquette: drive safely, talk quietly in public, keep the streets clean and keep comments clean on the Internet.

The student team representing Saudi Arabia and has a native Saudi Arabian student and two Koreans. They all go to Seoul National University of Technology.

“Unlike with Western countries such as the U.S., where there is a lot of accessible information about our country in different languages, there is a limit to the amount of information you can find about Saudi Arabia in Korean. I often have to rely on Arabic sources to find even basic information,” said Turki Alfagheeh. “In that way, I feel that the fact that I’m a native Saudi Arabian enhances the team.”

The group prepared a traditional Saudi Arabian rice dish for more than 100 people and served the food in Myeong-dong on Thursday. It took two full days to prepare the dish, the team said.

“Food is a powerful tool. It brings everyone together,” Han Yea-ji, a team member, said.

Meanwhile, a group of students in charge of promoting Turkey and Argentina opted to join forces and form a group of six, believing that it could enable them to launch larger and more meaningful projects.

On the street of Insa-dong, a major tourist attraction in central Seoul, the group wore headbands with “G-20” sticking out like antennas and matching T-shirts. They had set up a dart throwing game and distributed prizes to the winners. They also distributed flyers about the G-20 Summit.

“I think this is a very good opportunity to bring everyone together and discuss these issues,” said Brittany Young, an Australian high school student who was on a trip to Seoul. “The fact that [the summit] is in Seoul is also meaningful. It’s a great place, but few foreigners really know about Seoul.”

Yoon Yong-ki, a junior at Korea University who represents Turkey, would agree.

“I want other nations to see Korea in a new light; not as a war-torn country with a U.S. military presence or North Korea’s neighbor, but a full-fledged developed nation that plays a key role on the global stage,” he said.