A happy homecoming, family in tow

A happy homecoming, family in tow 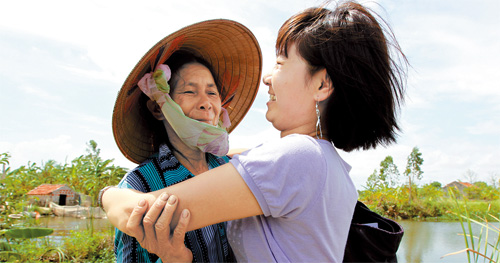 Right, Ngo Thi Thuy, who married a Korean man two years ago, is reunited with her mother in Vietnam on Friday.by Choi Jung-dong

A few photographs of their husbands-to-be are often all these women have to go on before boarding a plane to rural Korea to face labor in the fields and often insurmountable cultural and linguistic barriers.

Some 40,000 Vietnamese women now in Korea came here to marry, and most have no choice but to suppress the pain of being far from home and family to make their new lives work. 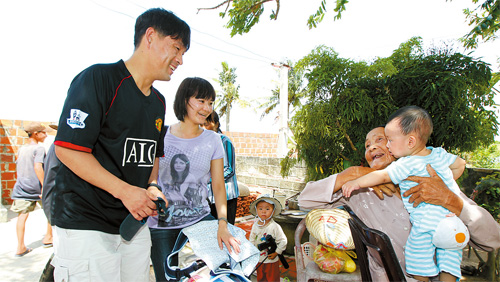 One such woman is Ngo Thi Thuy, 26. She left home two years ago to marry a Korean man she barely knew, but who is now the proud father of her seven-month-old son Min-ryul.

Ngo Thi Thuy was so happy with her new life that she convinced her younger sister Hyun, 23, to follow. Hyun then introduced a friend of her new husband to the third sister, Ming, 20. Hyun and Ming both live in Iksan, North Jeolla. Though relieved to have family nearby, the sisters were still sad that it was so difficult to afford a trip back home. 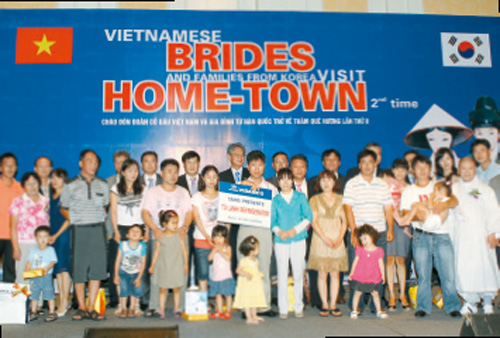 The eight Vietnamese-Korean families pose at a hotel in Hanoi the day before leaving to return to their ancestral homes. By Choi Jung-dong

But last week Ngo Thi finally had a chance to return to her beloved family home in Vietnam, along with her children and husband, as part of a program sponsored by GM Daewoo.

Seven other multiethnic families from Gangwon Province have also been sent to visit their homes in Vietnam as part of the program, which began on Wednesday and will last until Aug. 9. The automaker’s Vietnamese unit Vidamco and its Managing Director Kim Jung-in spearheaded the campaign.

Kim called Vietnam “Korea’s in-law country” and said, “Our corporation aims to give back to society by spending our profits planning this type of event.”

This is not the first time the company has helped Vietnamese immigrant spouses come home. Last January, 10 families participated in the program. This year, eight families with a total of 28 members were escorted back to Vietnam by Kim Hyun-jong, head of the Wonju Multi-cultural Family Support Center.

For Ngo Thi Thuy, the return home on July 30 was a dream come true. Even the five-hour ride from the capitol of Hanoi and the smell of all-natural fertilizer was comforting to her. Under the vivid blue sky, the ripe crops waved at her, while beyond them the sea stretched out to the horizon.

Hearing the automobile approach, Ngo Thi’s mother and her teenage brother and sister ran through the narrow levee of the rice paddy to greet her. The mother yelped in joy, “Oh, my daughter, I almost forget what you look like!” It was the first time they had seen each other in two years.

A huge feast was prepared for the guests. Thuy’s father spread an awning over the yard while the teenagers set the table, picked bananas and coconuts and cooked a chicken and goose eggs, still finding short intervals to play with their baby nephew Min-ryul.

Ngo Thi’s 76-year-old grandmother took the baby into her hands, and said, “How handsome! Doesn’t he look just like his father?” She looked over at Goo Man-seo, 41, but her compliment was in a language he could not understand. Still, the elderly lady squeezed Goo’s hand with a bashful smile.

“I hope this ten-day stay will help alleviate some of the pain my wife feels living so far away from her hometown,” Goo said. “I am planning to invite my father-in-law to live with us in Korea.”

In June, Goo met the husbands of the other two Thuy sisters living in Korea in Wonju to discuss the matter of their father-in-law, who has a large bank debt coming due from renovating the family’s aging home. “Even though we don’t have much money to spend ourselves, the three of us put down 500,000 won ($427) to ensure that our father-in-law can come to Korea and immediately start helping around the fields to earn money,” Goo said.

On Wednesday at around 10 a.m., the group of 28 family members and escorts arrived at Noi Bai International Airport in Hanoi, Vietnam. All were from different regions of Gangwon Province: Chuncheon, Donghae, Gangneung, Samcheok, Sokcho, Taebaek and Wonju. Once they retrieved their bulky duffle bags packed with gifts for the in-laws, each received a colorful bouquet. Placards welcoming the Vietnamese brides could be seen everywhere.

Five-year-old Hee-sung disappeared in the airport for a short time while his mother, who adopted the Korean name Son Min-ha, tearfully reunited with her own mother, but GM Daewoo employees found the boy 20 minutes later, bawling in the lobby.

Early in the morning, the group got on the bus to tour Ha Long Bay. The eight Vietnamese brides had already become closer since meeting at noon the day before at the Wonju Multi-cultural Family Support Center in Gangwon. Kim Do-yeon (adopted name) from Cheorwon County automatically assumed the oldest sister role, while Vui Thi Trang (23) from Sokcho County was the youngest in the group.

Kim Do-yeon’s Korean mother-in-law also accompanied the group. She said, “I am past 70 and counting down my days. I felt that it’s now or never if I want to meet my in-laws. So I paid my own way to join this trip.” Pointing to her sizable bundle, she explained, “I packed hot peppers and ginseng for my in-laws for sending me my beautiful daughter-in-law. Do-yeon not only bore Sung-min but has also served my neighbors very well. Although she can be stubborn at times, what can I complain about?”

Ranging from seven months to five years old, the 11 children made the bus ride as rowdy as a playground. I heard Baek Dong-sil singing a lullaby to his sleeping three-year-old daughter Seung-mi. “My wife doesn’t know how to sing Korean folk songs, so I sing my baby to sleep.”

All eight wives except for Ngo Thi speak Korean fluently like a middle-aged ajumma. Ha Thi Chiem, 29, from Donghae County, also displays a strong command of the language after just three years in Korea. Her husband Kim Chang-ha explained, “She is learning Korean at the Multi-cultural Family Support Center. After she gave birth to our daughter Seo-ae [two years ago], she became even more enthusiastic about picking up Korean.” Some Vietnamese mothers worry that their Korean speaking abilities (or lack thereof) will have a bad influence on their children.

Kim said, “My mother has a strong southern Gangwon provincial accent, very different from the standard city accent of Korean. As a result, my wife struggles to understand two different [Korean] languages.”

Chiem has devoted herself to caring for her aging in-laws, Kim’s 12-year-old daughter from a previous marriage and her teenage nephew. She even received a Dutiful Daughter-in-Law Award from the Navy Army Headquarters where her husband works.

Elsewhere on the bus, a spirited Vietnamese mother of two mischievous children who adopted the name Son Min-ha scolded the brother and sister like any other Korean mother, “Ay, you two are killing me! Don’t do that!”

Her husband said, “It was really difficult to communicate with her at first, but she dove into Korean with such zeal that now it’s much more comfortable.”

Towards the end of the long bus ride, Trang spotted the small island in Ha Long Bay where her parents lived. She wished she could go right away but had to attend the evening’s welcome party.

The to-do later that evening was attended by Korean Ambassador to Vietnam Park Seok-hwan, Vidamco President Kim Jung-in and other government officials and businesspeople. Five Korean-Vietnamese couples living in Vietnam were also invited. President Kim said, “The families here symbolize the strengthening amity between Korea and Vietnam for the past 18 years,” and expressed his wishes that their children would grow up to connect the two countries.

Ambassador Park expressed his hopes that “the children will grow up with the knowledge of Vietnam’s history and magnificent culture.”

Despite her still awkward Korean pronunciation, Ngo Thi Thuy gave an appreciative speech as the representative of the families. “I missed my hometown dearly in Korea and the sentiment grew stronger after I gave birth to my son. The Korean government offers various assistance to women like me, and the in-laws take care of us well. Thank you all for paying special attention to us, but you needn’t feel so much sympathy. There are many happy families here.”

The participating families received gifts from GM Daewoo and the Korea Chamber of Commerce and Industry, including refrigerators, blankets, ginseng and clothing.

But they would have to wait until the next morning at 8 a.m. to receive the most valuable gift of all - the chance to introduce their children and husbands to their Vietnamese relatives, and to the homes where they grew up.