Honoring our heroes at sea

Honoring our heroes at sea 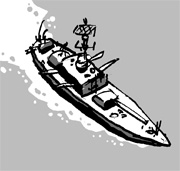 The ocean is the mother of all creatures, as evidenced by the French and German words for sea, “mer” and “see” respectively, which take a feminine article. But the god of the sea is male. That may have something to do with the stormy waves, which are far from the gentle, loving image of a mother. The male character of the sea is represented by Poseidon from Greek mythology and Yongwang (the Dragon King) from the Korean legend, among others. When the Vikings built a new ship, a virgin would be offered as a sacrifice to Poseidon. Similarly, the Korean folktale “Simcheongga” is about a girl who is offered to Yongwang to cure her father’s blindness.

In the Middle Ages, because of religious influence, the sacrificial offering evolved into a ship’s christening, and the shipowner would name the ship after his wife or daughter. The ritual of cutting the rope with an axe is symbolic of cutting the umbilical cord.

Many ships were named after women. Christopher Columbus set out on his expedition on the Santa Maria and returned home on the Nina. When Ferdinand Magellan completed his around-the-world voyage, the only ship in his fleet that survived the trip was the Victoria.

Modern ship names are more diverse. The Titanic signified the ship’s size, while the Queen Mary and the Queen Elizabeth are symbols of luxury.

Warships and naval vessels, however, are often named after historic figures. In Korea, the first ships of the KDX-1 and -2 series are named Gwanggaeto the Great, of the Goguryeo Kingdom, and Admiral Yi Sun-shin, of the Joseon Dynasty. The first ship of the KD-3 series is Sejong the Great.

King Gojong, the last ruler of the Joseon Dynasty, felt insulted when Western ships made military expeditions in 1866 and 1871. He wished to show off Korea’s power with the newest battleships, but the country did not have the technology to build a modern warship. In 1903, Joseon purchased a second-hand cargo ship from Japan’s Mitsui Corporation and installed four cannons. However, the ship was disarmed and became a cargo ship again when the Japan-Korea Protectorate Treaty was signed in 1905.

Destroyers and convoys, the core of today’s navy, are usually named after cities and provinces. Corvettes are named after mid-sized cities such as Cheonan. Landing boats take their names from islands and peaks, while rescue boats are named after industrial complexes. Patrol boats are named for different kinds of vultures. The patrol boat that was involved in the Second Battle of Yeonpyeong was the Chamsuri, and the high-speed boat involved in the battle was the Geomdoksuri. The sixth Geomdoksuri, which was commissioned last week, is named the Park Dong-hyeok, after the sixth soldier who died in that battle. These patriotic souls are now the guardians of the sea. Let’s pay our respects to their patriotic spirits one more time.