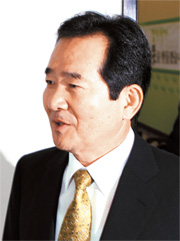 Democratic Party Chairman Chung Sye-kyun stepped down yesterday to take responsibility for last week’s by-elections defeat, sparking a demand by some members for the entire leadership to quit in advance of a September convention.

“I feel responsible for the party’s disappointing performance in the July 28 by-elections,” Chung was quoted as saying by party spokesman Woo Sang-ho. “It is undesirable for the party to prolong the election aftermath, and it is necessary to hold a convention to select a new leadership. Therefore, I am stepping down from my post.”

Following Chung’s resignation at a meeting of the party’s Supreme Council yesterday morning, two camps started slugging it out over the idea of an interim leader before the mid-September convention.

Mainstream Democrats loyal to Chung said Kim Min-seok, a Supreme Council member who was the runner-up in the 2008 leadership race, should take over the party until the convention. But a group of reformists led by former DP chairman Chung Dong-young said the entire council should step down so they can’t manipulate the convention’s procedures.

The Supreme Council is the highest decision-making power of the Democratic Party. In addition to the chairman, five members are elected at a national convention, and two are named by the chairman. The party’s floor leader in the National Assembly is also a member of the council.

Representative Park Jie-won, DP floor leader and a veteran politician who has played a mediating role in the party, reportedly supported the idea that the current leadership should step down, but faced resistance.

A preparatory committee for the national convention held their first meeting yesterday to discuss the leadership election, but it only confirmed the factional divide inside the DP.

Reformist lawmakers led by Chung Dong-young boycotted the discussion, saying his group won’t participate in a national convention held by the current leadership.

Representative Kim Boo-kyum also resigned from his post as the deputy head of the national convention preparation committee in protest against the current leadership.

“It is undesirable for a single faction to design the national convention preparation,” he said.

Kim is close to another political heavyweight, Sohn Hak-kyu, who is expected to run in next month’s DP leadership race.

Moon Hee-sang, the head of the committee, however, warned against the growing factional fights inside the DP ahead of the next month’s chairmanship race. “We may never have another opportunity [to rebound] if we have mudslinging just because others have different opinions,” Moon said. “‘Don’t cut off your nose to spite your face’ is an old saying we must remember.”