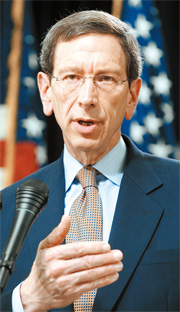 The engineers of new sanctions on North Korea said yesterday that the punishments will be implemented within weeks and hurt more than the freezing of assets in Banco Delta Asia in Macau in 2005.

“We have yet to finalize them,” Robert Einhorn, the State Department’s special adviser for nonproliferation and arms control, said in a Seoul press conference on his second day in South Korea. “I can’t give you a definite day, but in the next several weeks, we do expect to give some specific entities’ names.”

Einhorn said the sanctions will target entities or individuals engaged in illicit activities by or for North Korea and block any property or assets they possess within the U.S.

The visit by Einhorn, along with Daniel Glaser, U.S. Deputy Assistant Treasury Secretary, followed a July 21 announcement by U.S. Secretary of State Hillary Clinton that the U.S. will strengthen sanctions on the North.

“The Treasury Department is committed to employing all appropriate new and existing authorities to protect the international system from North Korea’s abuse,” Glaser said.

Einhorn said freezing assets in the U.S. would have a limited impact because North Korea’s illicit businesses, which he estimated to be worth hundreds of millions of dollars annually, take place outside the U.S.

“But,” he said, “by publicly naming these entities, these measures can have the broader effect of isolating them from the international financial and commercial system.”

“I think international institutions throughout the world will re-examine and take into account information that we provide [on North Korean illegal activities],” Glaser said. “I think we can continue to make an important impact on North Korea.”

Einhorn said apart from the new measures, existing sanctions will be “aggressively” implemented.

The new sanctions, forceful as they may be, are part of the dual track approach toward North Korea, Einhorn said, of pressure and positive encouragement.

But Einhorn said that doesn’t mean the U.S. will forgive all if North Korea returns to six-party talks on ending its nuclear weapons program. He reiterated the U.S. position that the North should show sincere responsibility for recent provocative actions, including the Cheonan incident. The warship Cheonan was sunk by what a multinational investigation concluded was a torpedo from North Korea on March 26, killing 46 sailors. The North has denied it.

“We can’t repeat the kind of cycle we have been through where North Korea is engaged in talks and makes commitments, and abandons the talks, especially in the wake of the Cheonan incident,” he said. “Before the six-party talks reconvene, it should be prepared to make commitments and fulfill them.”

Einhorn is scheduled to meet officials of the Finance Ministry today to discuss sanctions on North Korea and Iran and is planning to visit China at the end of this month to seek cooperation from what he called a “responsible stakeholder” in the new sanctions.