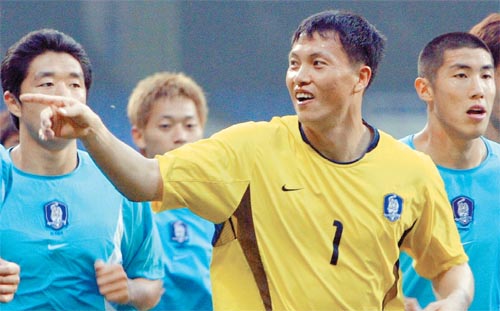 Veteran goalkeeper Lee Woon-jae announced his retirement from international competition yesterday, drawing the curtain on a 16-year career with the national football team.

The 37-year-old Cheongju, North Chungcheong, native made his national team debut against the United States in an international friendly match on March 5, 1994, and has played in a total of 131 matches for the national team.

Lee will play in his final international game against Nigeria at Suwon World Cup Stadium on Aug. 11.

“I believe I have devoted a lot to the national team over the years,” Lee said yesterday. “It’s now time for me to step away from the team and make room for the younger players. It’s important not to overstay your welcome, and I think now is the time for me to leave.”

Along the way, Lee has appeared in four World Cups and two Asian Cups in his career.

Developing a reputation for strong leadership skills and instinctive play, Lee had been a mainstay on the national team since the 2002 Korea-Japan World Cup, when the club made a surprise run to the semifinals. Lee was an early favorite to start in the net for the Taegeuk Warriors at the 2010 South Africa World Cup but struggled in the early stages of the current K-League season, casting concerns among fans and media alike. National team manager Huh Jung-moo decided to start Jung Sung-ryong in all four of Korea’s matches at the World Cup, with Lee providing a mentor role for the young keeper.

Lee alluded to the possibility of retirement from international competition at a press conference after the 2010 World Cup this summer, but he didn’t mention a specific date for his final game at the time.

“It was my last World Cup. I prepared a lot and thought about how I would compete in games,” Lee said after Korea bowed out of the competition. “Even though I did not play in any games, I had a role to play on the team. I shared my experiences with the younger players on the team. I felt extremely happy in participating in my final World Cup.”

Lee has had a distinguished professional career with the Suwon Bluewings since the team’s inaugural year in 1996.

He signed with Suwon out of Kyung Hee University in 1996 and has played his entire career with the Bluewings, except when he joined the Sangmu Phoenix from 2000 to 2001 as he was serving his mandatory two-year military service. Lee has appeared in more than 200 matches for the Bluewings in his career.

Referred to as “Spider Hands,” Lee earned a reputation as the all-time best goalkeeper in the K-League when it comes to stopping kicks with the game on the line. In 12 penalty shootout situations in his career, Lee boasts an impressive record of 11 wins.

He was also named the K-League Most Valuable Player of the Year in 2008.